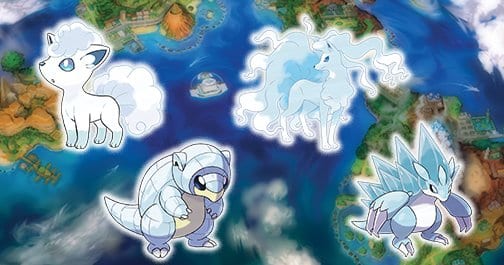 Transformed versions of certain Pokemon from the first generation will be included in Pokemon Sun and Moon when they release later this year.

Revealed in a new trailer alongside brand new Pokemon, the variations are Alola Forms that are created due to the Pokemon “thriving in Alola.” Four of the Pokemon that have been affected by the area’s microclimate are Vulpix, Ninetales, Sandshrew, and Sandslash – each of them transforming into Ice Type versions of their original forms. Ninetales will also be Fairy Type whilst Sandshrew and Sandslash will be Steel Type as well as Ice Type.

Microclimates of the Alola region have caused some Pokémon to take on different appearances! #PokemonSunMoonpic.twitter.com/J61RxXTqj2

The other classic Pokemon to be affected is Exeggutor. It has grown considerably taller, now having a neck similar to that of a giraffe. The trailer suggests that it will be able to use its new size in combat to perform moves if would have been unable to do before. The Alola Form makes Exeggutor Dragon and Grass Type, with its ability being Frisk.