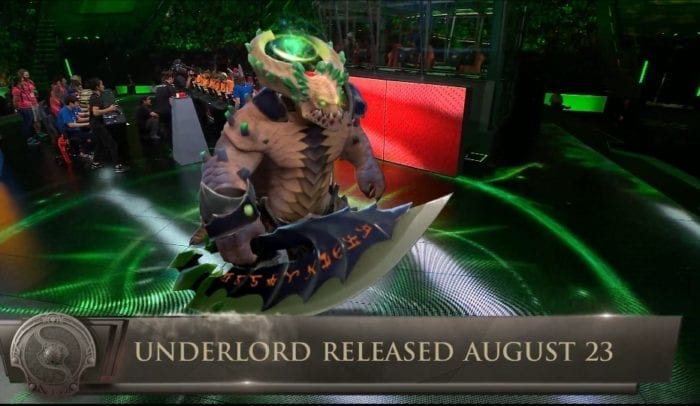 The world’s biggest annual Dota 2 tournament The International has been wrought with surprises so far, with tense matches and many underdogs surprising established teams.

After all of today’s nail-biting matches came the cosplay competition, and then finally the All-star match, where the 2 event hosts Kaci and Slacks face off against eachother in a 10 v 10 no-holds barred insanity match, with pro players and fans from the crowd taking up the helm.

During the All-star match perhaps the biggest surprise of the entire gig came when they paused to switch pro player Notail out for the latest (and perhaps, final) addition to the Dota 2 roster. Underlord is an iteration of a classic Dota character who went by the name of Pit Lord or Abyssal Underlord. He’s been hinted at for years, and is easily one of the most demanded heroes by fans of the original Dota.

You can check out his abilities, lore and stats out over on his Dota 2 wiki page, and expect him to be released on August 23. Not long to wait for a possibly revolutionary change to the meta!