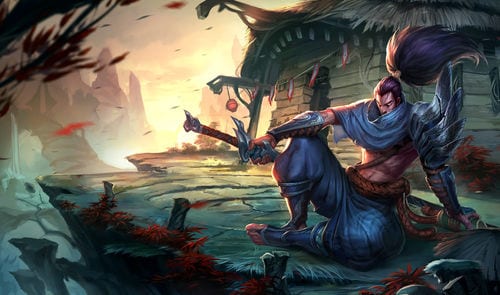 League of Legends’ lonely swordsman Yasuo has been becoming a more common sight in the Top lane after these past few patches. With top lane win-rates up around 52% nowadays, Riot Games employee Meddler recently confirmed that much like tank Ekko, tank Yasuo is going to be nerfed soon.

Meddler revealed this in response to a comment on the League of Legends forum by user Danic, who asked if Riot Games is still keeping an eye on the champion. Meddler responded to Danic with the following comment: “He is looking a bit out of line, yeah. We’ll likely trim a bit of power sometime in the next couple of patches. Not sure what yet, one of the first things we’ll look at, though, is whether tank builds are inappropriately effective.”

Currently, according to Champion.gg, the most popular and successful top lane Yasuo build involves items such as Frozen Mallet, Trinity Force, and Sunfire Cape. These items increase Yasuo’s survivability, allowing him to survive longer in team fights and take on usual top lane tanks, but they don’t work alongside his passive Way of the Wanderer, which doubles Yasuo’s crit chance in exchange for less crit damage.

Speaking on the forums, Meddler noted that he may be getting patched around 6.19, because patch 6.16’s lock date is behind us and the two following patches are going to be focused on Worlds. Since Yasuo isn’t a problem in the professional scene, he’s waiting for other champs, including Ashe and Jhin, to get some attention.