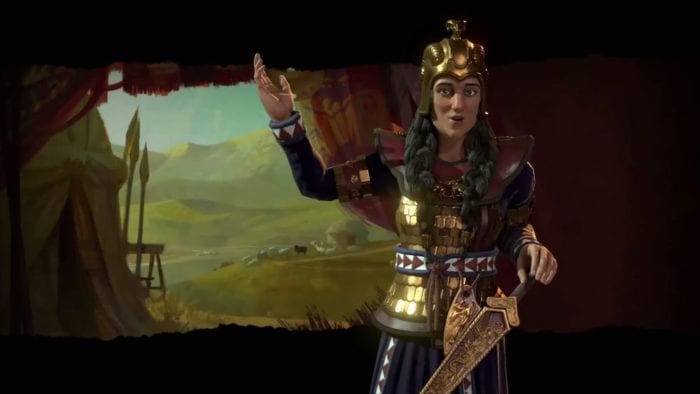 The Scythian civilization graces the latest First Look trailer for Sid Meier’s Civilization VI. The Scythians appear in the Civilization series for the first time, and are represented by Queen Tomyris, who supposedly defeated and killed Cyrus the Great of Persia. She also looks like a complete badass, decked out in shiny armor.

Tomyris’ special ability gives her units a bonus when they attack wounded units. They also get a slight heal whenever they defeat an enemy, implying her armies were made up of vampires. Whenever they build Light Cavalry, or the unique Saka Horse Archers, they get two units instead of one. This unit is described as “highly mobile”, and does not require the Horse resource to construct, allowing the Scythians to attack their enemies by defying logic itself.

The Scythian unique tile improvement is the Kurgan (not thatKurgan), which provides additional faith and gold. This allows the Scythians to rapidly advance in religion early in the game. Finally, we get a look at Tomyris’ personality: she is an honorable warrior, and she really hates people declaring war on her all of a sudden.

Overall, the Scythians appear to be a very powerful military civ, particularly in the early and Classical eras of the game. Saka Horse Archer rushes could probably devastate unprepared civs, and Tomyris’ combat abilities will remain particularly potent throughout the game. It would be interesting to see how the Scythians are differentiated from the Huns or Mongols—if they make it to Civilization VI at some point.

Sid Meier’s Civilization VI releases worldwide on October 21. It will be available on Windows and Mac as well as Linux. Previous First Look trailers for the game featured England, Brazil, France, the Aztecs, Egypt and USA! USA! USA! It also features a tech tree narrated by Ned Stark himself.