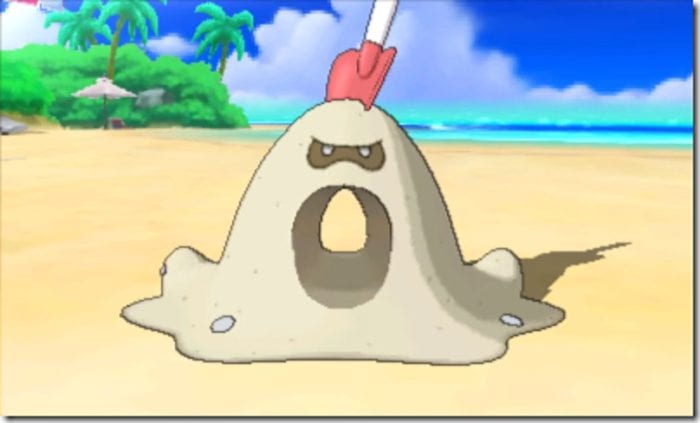 A brand new trailer was released for Pokemon Sun and Moon and it revealed four more Pokemon. The four new Pokemon are Crabrawler, Sandygast, Palossand, and Stufful.

Starting with Crabrawler, it’s a Fighting-type Pokemon, despite its sea-creature appearance, with boxing gloves for claws, and it comes with the Hyper Cutter and Iron Fist abilities. Crabrawlers are also known to hate losing.

Sandygast and its evolution, Palossand, are Ghost/Ground-type Pokemon and along with an interesting typing, both Sandygast and Palossand come with the new ability Water Compaction, which drastically increases its defense when hit by water type moves. Sandygast are created from a grudge that turns sand into a Pokemon while Palossand can steal the life force of nearby Pokemon and people.

The last Pokemon that was revealed for Pokemon Sun and Moon in the new trailer is Stufful. Stufful is a Normal/Fighting-type Pokemon and is the pre-evolution for the previously announced Bewear. Serebii notes that Stufful is very popular with kids and women but it hates being touched. It also happens to be much stronger than it looks and it only gets stronger after it evolves.

Another Pokemon that was recently revealed is the Fire/Dragon type Pokemon Turtonator. It comes with an exclusive move called Shell Trap which deals damage to the opposing Pokemon if it gets hit with a physical move.