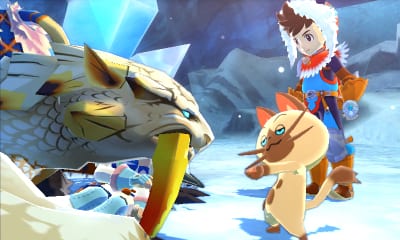 Monster Hunter Stories, the latest entry in Capcom’s monster hunting series (ha), has just gotten a new trailer showing off one of the game’s monsters. In this trailer, which you can check out down below, we get a quick look at the Aptonoth – a beast-like monster that our protagonist (male or female, depending on player choice) can ride on to travel around the world.

Capcom has also revealed the designs for a few amiibo to be released along with the game. Monster Hunter Stories is an entry that’s meant to focus more on plot and story, as compared to previous Monster Hunter games that have been more about the enjoyment of playing with friends and crafting new gear on your own. It also looks a lot more kid-friendly than previous entries in the series.

Monster Hunter Stories will be coming exclusively to the Nintendo 3DS on October 8 in Japan. An English release for the game hasn’t been announced yet, but we’ll let you know as more information comes our way.