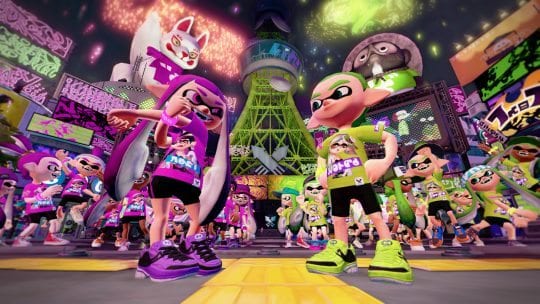 The final Splatfest will pit the squid sisters against one another on July the 22nd, following news the pair will join Super Mario Maker as costumes.

Splatoon’s sixteenth and final multiplayer festival will air on July the 22nd at 2AM PT till the 24th at 2AM PT. Players will be matched together with others from their respective region, with Japanese players being matched together and North American and European players matching with each other. The top 100 players will also be ranked and announced in their separate regions.

Players can vote for preferred maps in-game from Monday onwards at 7AM PT. Some of the past Splatfest have tasked players with choosing between Pokemon Red and Pokemon Blue, Transformers’ Autobots and Decipticons, and cats and dogs.

Nintendo will also introduce Callie & Marie costumes to Super Mario Maker on July the 7th, following a gameplay trailer of the pair in action on the company’s YouTube channel.

The pair will launch alongside an event course inspired by the Splatoon series – featuring enemies designed as squids, an underwater skin as a squid, and sound effects from the game.

“Try completing the course twice to get both costumes,” said a spokesperson for Nintendo.

Who do you think is the better squid sister? Let us know in the comments below.

Temtem, the Pokemon-Inspired MMO, Has Sold Over 500,000 Copies

Nintendo Will Be at GDC to Talk About the Development of Animal Crossing: New Horizons