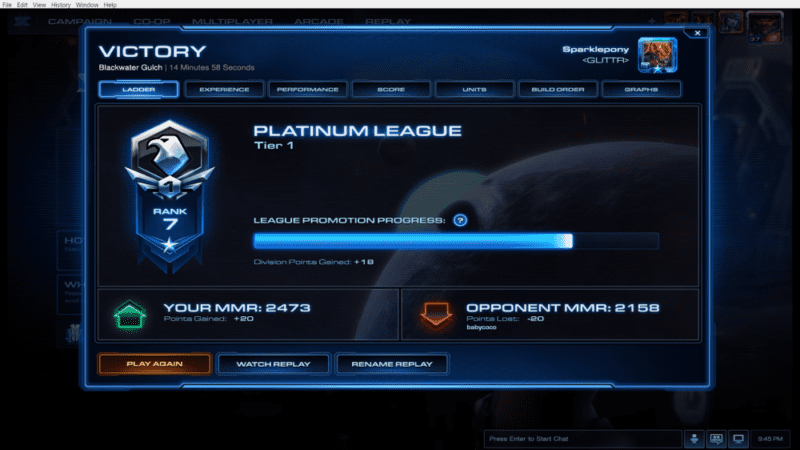 Believe it or not, StarCraft II has has been around for almost six years now. It feels like it was just yesterday when the sequel to the institution RTS that was/is the original StarCraft was revealed. Time flies.

Anyway, pretty much since the game has existed, fans have desperately clamored for (among other things), a visible view of your individual MMR (match making rating) and more transparency when it comes to promotions. As it currently stands, there’s not really any accurate way to track how well you’re doing and how close you are to getting those all important promotions. While it has been known for a while that changes were on the way, finally, StarCraft II loyalists get to see for the first time, what shape these changes will take. Behold the Ladder Revamp.

Of course, in classic Blizzard fashion, the time table for the actual release of the Ladder Revamp is “very soon”, but assuming “very soon” means “in our lifetimes”, StarCraft II fans will get a lot of great changes with this update. Ranks will be split into three in order to give a more accurate representation of whether not you’re higher or lower down in a rank. Players will also be able to see how close they are to a promotion and are treated to a sweet animation of their rank changing into the next one. Also, as expected, MMR will finally be a thing that players can check.

The response on Reddit and other places has been incredibly positive, so perhaps this will be another step from Blizzard towards righting another one of the wrongs that took place early on in the game’s life. The StarCraft II development team has been incredibly transparent (by Blizzard standards) over the last year or so, which is another thing that fans of the RTS have wanted for quite some time.

The StarCraft II Ladder Revamp has no date other than “very soon” but the current season ends in mid-July, so it’s possible to think that it could be ready to go for the start of the next season.