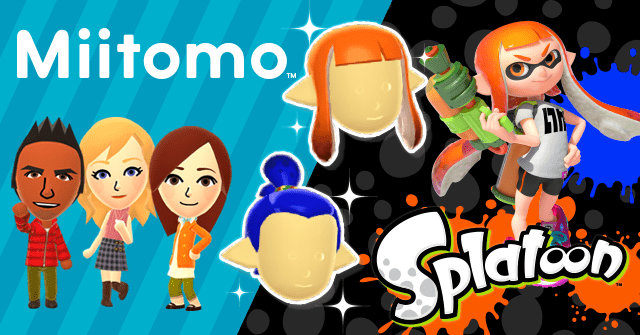 When Splatoon first released in 2015, many people were left with the existential question of whether they were a kid or a squid. The world has largely learned to move on from pondering this question, but not for long. You are no longer safe. Nintendo has recently unveiled plans to release Splatoon items in their latest and strangest app, Miitomo.

There is a catch, however: several of the items will only become available after a certain number of retweets on Twitter with the #Miitomo_Splatoon_RT tag. Specifically, the Inkling Boy Wig will be released after 10,000 retweets and the Inkling Girl Wig is to be available after 20,000 retweets. It’s an interesting incentive to getting new items as well as enticing more people to download the app. Smart move, Nintendo.

That’s where the teasing stops, though. Other items, including shirts, shorts, and shoes designed after the default Splatoon Inklings will be available in the Miitomo Drop mini-game right off the bat. As well, a Squid pin accessory will also be up for sale in the Miitomo shop. And, finally, an Ink Tank accessory will be available for players willing to dish out the rewards points from their My Nintendo account.

Miitomo is already a quirky app as it is, so the Splatoon items seem like a perfect fit, and we can’t wait to see what other items come to the app in the future. Please, give us Samus helmets. That’s all we ask.

The entire Splatoon event is set to run from April 27th at 12:01 a.m. PT to May 29th 7:59 a.m. PT. What other cross promotional items would you like to see Nintendo bring to Miitomo? Feel free to sound off in the comments below!