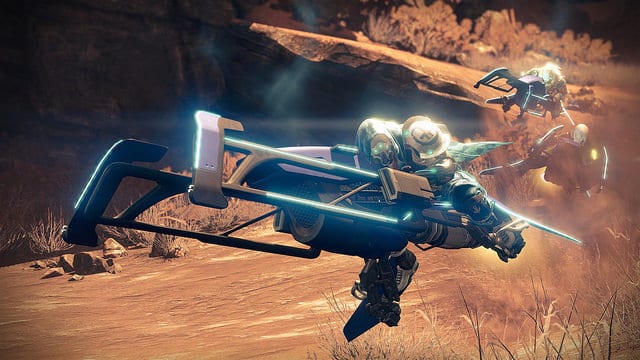 In addition to armor and a new exotic sniper rifle, PlayStation players have also received an exclusive sparrow in Destiny’s April Update. A rustic-tinged bike, sporting vanguard blue and orange, the sparrow is called the Velumbra.

To unlock the new sparrow, first travel to the Reef. While the rest of the update’s main quests will be available from Varicks, head over to Petra first, and pick up the Fight Fire with Fire quest. Unfortunately (or fortunately if you just want to get your hands on the sparrow) the quest only has a single step. For ‘Gather the Essence,’ you must travel to the dreadnaught and gather Essences of Darkness from slain champions in the Court of Oryx.

The quest only calls for 6. Reciprocal Rune Champions drop one, while Stolen Drop two, and Antiquated drop three. A few times through the Court on any difficulty and the quest will pop up as completed.

Travel back to Petra, and receive your well earned sparrow.

As we continue to make our way through the April Update, keep checking back right here on Twinfinite for all the things a growing guardian needs to know.