Just like the fight with Yhorm the Giant, the Ancient Wyvern is another gimmick fight in Dark Souls III. This means that if you don’t figure out the gimmick, you’ll end up spending hours on this fight, dealing small amounts of damage to his feet until the Wyvern finally falls dead. If you want to beat him quickly and relatively painlessly, read on.

At the start of the fight, run straight and up the stairs. The Ancient Wyvern will appear and prepare to breathe fire at you. If you’ve been sprinting forward, you should be able to reach his head before the fire breath actually starts. At the top of the stairs, turn left when you see the large bell and head inside the ruined building. Once inside the building, head up the stairs and start avoiding the bird head enemies. 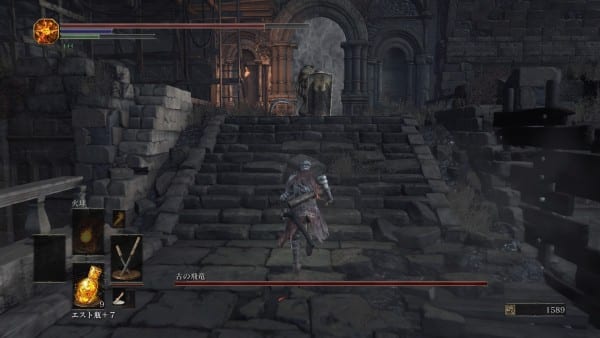 You’ll want to make sure your equip load is as low as possible so that you get a few more i-frames in your roll, making it slightly easier to dodge enemy attacks. As you progress up the stairs, the number of enemies will increase, and there’ll even be a larger guy with an axe. The trick to dodging the axe enemy is to roll right as the overhead swing comes slamming down. You should be able to roll right through it and continue running past him.

Once you see the fog wall ahead of you, look for the ladder to the left and climb up. Run along the wooden platforms, and you’ll have to drop down twice before you find yourself right on top of the Ancient Wyvern. Wait for the boss to finish its fire breath attack and align yourself right above its head. When you’re ready, jump down and hit the attack button to perform a plunging attack. If you land on the Ancient Wyvern, the plunging attack will immediately drain its entire health bar. And that’s it, the fight is yours.