When the fight against Yhorm first starts, run straight for the throne at the very end of the room. At the foot of throne, you’ll find the Storm Ruler sword (!), which is vital for winning this fight, unless you want to spend hours dealing 60 damage to Yhorm’s feet.

After you’ve grabbed the sword, either equip it, or use a Homeward Bone to get out of the arena so you can spend some time getting used to the sword’s move set. We suggest putting your shield away for this fight. Yhorm’s attacks are very heavy and can deplete your stamina even with a decent shield for blocking. Thankfully, even though he hits hard, it’s very easy to dodge his attacks. He has an overhead swing where he smashes his blade into the ground right in front of him, and you can evade this simply by rolling between his legs.

He has a slightly more dangerous sweep attack where he swings his blade in a wide arc in front of him. This can hit you if you’re standing at his side, but you can also use your i-frames to dodge this fairly easily. Occasionally, Yhorm will stomp his foot on the ground, creating a shockwave that pushes you back. This won’t deal any damage to you, but you will have to take a few seconds to recover and get back up on your feet. 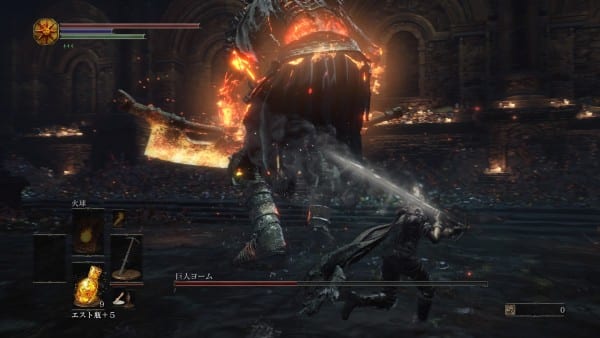 With the Storm Ruler equipped, you’ll want to hold down the L2 button until the sword gets a storm buff. You’ll be able to tell it’s buffed when the storm effect sticks to your sword permanently. Take note that the storm effect will appear once you hit L2, but you have to hold down the button for a while more until the sword gets a short burst of storm energy and makes the effect permanent – that’s how you’ll know it’s buffed.

Once the sword is buffed, continue holding down the L2 button and wait till Yhorm is within your melee range. With the L2 button held down, hit the R1 button to use the Storm Ruler’s weapon art. This will stagger Yhorm and deal about 5000 damage to him. You’ll be using this weapon art for the rest of the fight. Take note that each time you use the weapon art, the storm effect will disappear, and you’ll have to buff the sword with L2 again.

Once Yhorm is down to half health, he’ll imbue his sword with fire, and start dealing fire damage to you. However, his attack patterns do not change. He hits even harder in this phase, but as long as you’re rolling between his legs and staying behind him like you’ve been doing in the first phase, this shouldn’t present too much of a problem. Simply buff the sword each time you manage to get behind him, and then use the weapon art after Yhorm’s next attack. You should be able to take him out after about five uses of the weapon art.