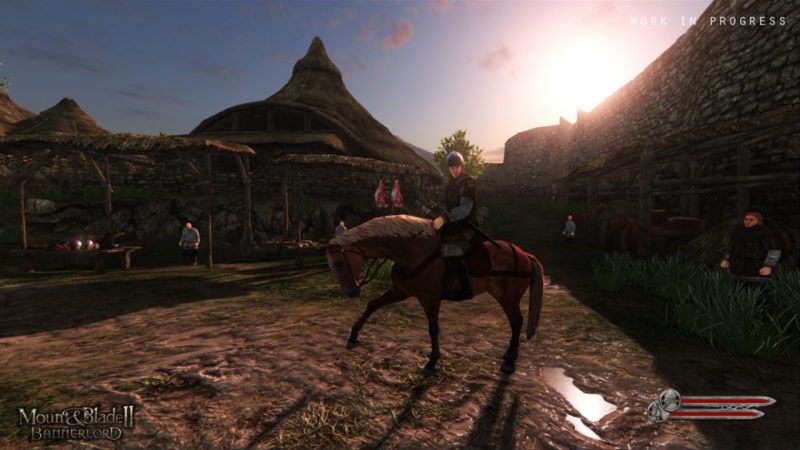 The highly-anticipated sequel to Mount & Blade, developed by the Turkish studio TaleWorlds, saw 40 minutes of footage shown at PC Gamer’s Weekender event. The focus of the gameplay video was heavily on the character creation and combat elements of the game, both vastly expanded upon according to the devs.

The video begins with a quick overview of the character creation options. TaleWorlds reps said ‘We spent a lot of time making our customizable options more detailed and realistic’ and showed off the menus and sliders to be included in the game. It goes on to show a few premade characters resembling real-world celebrities to highlight the extent of the customization options. Creative players out there who might want to try taking on Calradia as Obama or Albert Einstein, now’s your chance.

The video also gave us a greater insight into how towns will work in Mount & Blade 2: Bannerlord too. The footage showcases new additions to settlements and some of the new paths that players can choose to take on the road to rule. Most notably was the inclusion of a new feature, Crime (and possibly punishment via spiked mace to the face). You can take down thugs and local ruffians and set yourself up as a crime lord in their place. However, in doing so the video suggests you may cause some friction in the town, bringing a new element of strategy to towns.

The combat is the main focus in the gameplay video and the emphasis, as ever, is placed on you being on the ground and in the thick of the fighting. You can command your troops in battle with a greater degree of accuracy than previous iterations as the combat AI has been worked on and improved according to the developer. At one point in the video, there is a battle in which the enemy lord is shown reacting to your decisions and thus decides to seek higher ground, which hints at what might lie in store for the armchair strategists among us. You can check out the footage below.

Mount & Blade 2: Bannerlord has been rumored for release in Fall 2016. What do you make of the gameplay video for Bannerlord? Let us know in the comments below.