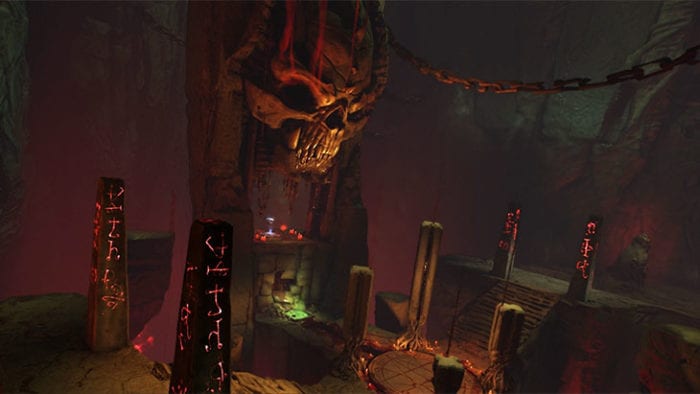 With the (potentially) grand return of Doom now closer at hand than ever, Bethesda has given us the biggest look at the game’s multiplayer yet, detailing all nine of the maps headed our way at launch.

“From the blood-soaked UAC facilities on Mars to the fiery depths of Hell, DOOM multiplayer will take you on a tour of nine deviously diverse locations,” the publisher explains.

“While each multiplayer map is distinct, they all share a few traits in common. For starters, you’ll need to stay in constant motion to stay alive; every map is constructed to keep the action brutally fast-paced. These multi-tiered combat arenas are littered with hazards, and packed with items that can turn the tide of combat at a moment’s notice.”

And best of all, “while they all have secrets for you to uncover, none of them are built to allow for easy sniping or hiding points.”

In the short video below, you can get a feel for the action on four of the maps, with quick glimpses of the other five. The four featured maps are Helix, Disposal, Chasm, and Infernal.

Helix “is where they experiment on demons and develop advanced weaponry. Which, naturally, makes it perfect for a quick round of Clan Arena.” Disposal is a smaller map, “the main waste processing facility for the UAC research and residential complexes. Unsurprisingly, it’s full of radioactive slime.” On the opposite end of the spectrum, there’s Chasm, a massive map that “takes you deep below the polar ice caps of Mars. A great place to play Freeze Tag.” And finally, a mid-sized map set in (you guessed it) Hell, Infernal has “both interior and exterior elements. Lots of platforms and chasms, along with teleporters.”

Here are the details for the other five:

Additionally, Bethesda detailed some of the map elements players will have to deal with. There are helpful things like the standard teleporters and bounce pads, but then also dangers, like explosive barrels and hazard canisters that leave behind hazardous slime after exploding.

If that wasn’t enough, there’s also radioactive slime, fire, and energy/plasma, all of which only kill humans, leaving the demons delightfully untouched. (Stupid demons, die to radioactive slime like the rest of us!) Evening things out a little however, lava and pits of death will still kill humans and demons every time.

Doom is set to release May 13 on PS4, Xbox One, and PC. Not only did we recently learn what the alternate cover of the game would look like, but we also found out the long-awaited closed beta will run from Mar. 31 to Apr. 1. If you missed the Doom’s chaotic official multiplayer trailer, check it out here.

What do you think of the nine maps? Will they be enough to hold you over until awesome user-created content starts making its way to the surface? Let us know in the comments.