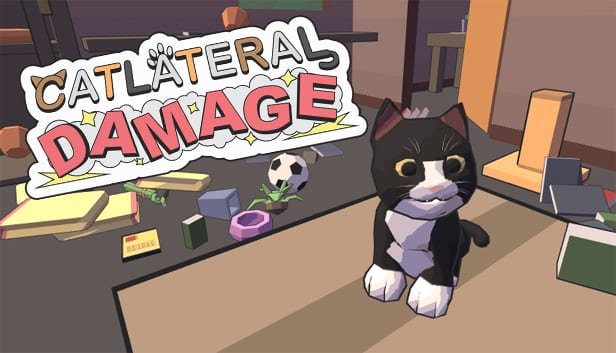 Catlateral Damage is another game in the wave of simulator experiences, with a bit of a twist. In this game you play a destructive house cat from a first-person perspective.

The game started on PC in 2013 as a prototype before seeing a successful Kickstarter campaign. Developer Manekoware announced today on the PlayStation Blog that they would also be bringing the game to PS4 on March 22, with a 20 percent discount for PlayStation Plus members.

Catlateral Damage of course has you playing as a cat, with the objective being to use your paws to cause as much destruction as possible. Procedurally generated levels keep things fresh along with different locations like your owner’s house, a log cabin, a mansion, a supermarket and even a museum.

Two game modes are available, called Objective Mode and Litterbox Mode. In the first you try and knock over as many items in the time limit you’re given. In Litterbox, you’re able to destroy everything at your leisure for as long as you want. Both modes allow you to collect upgrades that improve your movement and swatting by playing with cat toys.

Take a look at the announcement trailer down below. Have you always dreamed of playing as a evil destructive cat? Are you looking forward to Catlateral Damage, or do cats already cause you enough headaches in life? Let us know down in the comments.