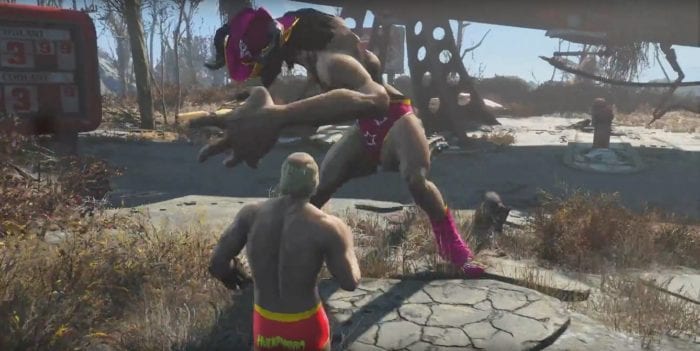 It all started with the incredible mod for Skyrim by FancyPantz that replaced the dragons with Macho Man Randy Savage. Now, in the post-Macho Dragon Mod world, we should rightfully expect every Bethesda game to feature the Macho Man at some point. Luckily, we didn’t have to wait too long for the PC version of Fallout 4 to deliver.

Modder FancyPantz returns alongside AronaxAE to bring you (Fallout 4) Macho Claws: A Fallout 4 mod for the PC that replaces all Deathclaws with the legendary WWF/WWE wrestler. Macro Man Randy Savage (or some warped version of him anyway). Just watch and see for yourself:

The real majesty kicks in once multiple Deathclaws erm I mean Macho Claws start appearing around :42 second mark and begin to terrorize a town. Not even Hulk Hogan and the power of Hulkamania can resist the combined might of the Macho Man Randy Savage and his pack of Macho Claws. Classic Macho Man lines such as “YEAH” are in full display here of course.

If you want to download the Fallout 4 PC mod for yourself, you can do so via Nexusmods here.