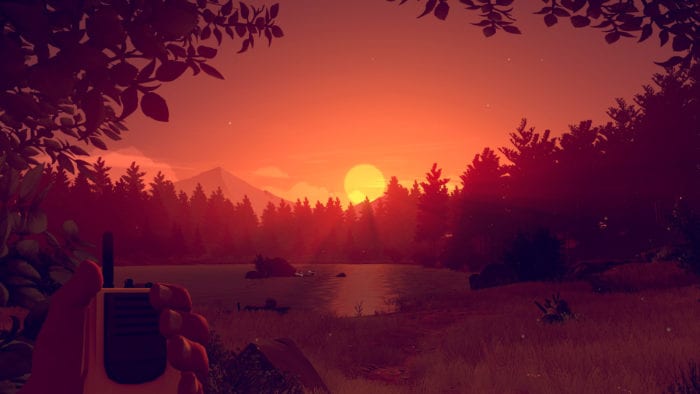 You can now watch the first 20 minutes of Firewatch, the upcoming first person adventure game and debut title from Campo Santo. The game presents the player with solitude and the Wyoming wilderness. You play as Henry, a newly hired fire lookout, who’s job description includes staying on the lookout for fire, dealing with skinny dipping teenagers, but notably does not include rappelling down steep shale cliffs.

Before watching it, you should know that this video should be rated S for sass.

The video gives us a glimpse into the amazing artwork, which stylistically and beautifully depicts the forests and mountains of Wyoming in bright, bold colors that change and turn with the arch of the sun. The animation likewise is fantastic, as your character climbs, falls, and jumps through the environment, and also feels about, picking up a candy bar, an antler, and a typewriter.

Likely the most enticing thing about Firewatch, at least in this short preview, is the writing, something the first twenty minutes showcase perfectly. Part of the game is about solitude, and that is an innately human thing. What would drive a person to want to live miles deep in the wilderness? How do they cope? This of course offset by the unending sass, humor hiding the emotional depth in an obvious, but wonderfully clever way. The walkie-talkie banter between yourself and Delilah, your female supervisor and largest human contact, is definitely key to enjoying the game, and this trailer showcases the fantastic dialogue.  The writing appears also to be incredibly dynamic. Your boss complains  about the music as you run away, carrying away the boom box you stole from those pesky teenagers.

The game is set to be released February 9th on PS4, Windows, Mac and Linux.