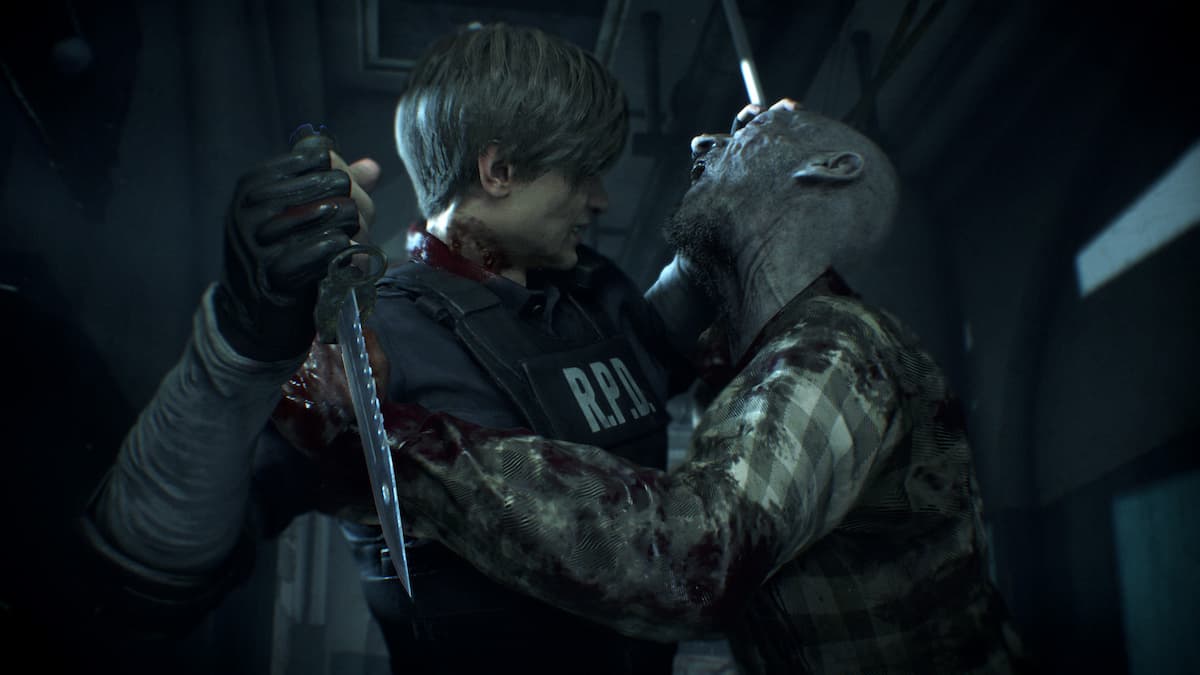 Zombies are an enemy type as inevitable as both death and taxes in the video game world. Like them or hate them, they have their undead jaws firmly clasped onto gaming as a medium. However, while some games on PlayStation’s hardware have variants of zombies, only a select few are true “zombie games”; those titles which truly showcase the horror of the undead. Of them, these are our picks for the top 10 best PS4 and PS5 Zombie Games you can sink your teeth into.

Killing Floor 2 is a great multiplayer zombie game, even if it does require serious investment in order to feel like you’re truly getting the full experience.

The game marries a lot of the satisfaction of online RPGs with the foul undead hordes zombie fans know and love. It also has some interesting and unique weapons as well as some horrifying zombies that look like terrifying experiments from a mad scientist, and these uniquely cybernetic zombies really help make the game feel more visually distinctive. The game lends itself to its cartoonishly violent energy very well too, with over-the-top weapons and gore effects that give the game a comical feel.

If you like to do a little more tactical thinking and RPG-like mechanics, Killing Floor 2 has you covered there as well. The ‘Perk” class system has a lot of variety, though that also means there’s the potential to play your perk wrong or make the wrong choice after investing hours into the game. For those who enjoy this aspect though, the decision-making element in a zombie shooter will be very welcome.

Zombies and parkour may have seemed an unlikely combination, but Dying Light 2 continues to show that the two concepts can be combined harmoniously.

The game adds upon a lot of the things that made the first Dying Light a fun action game and improved it by adding more human factions with more depth to the world. In addition to improved graphics and a new game world, the setting is brought to life by Mad Max-style outfits that many of the factions in the city to the unique nature of the city within a city that is Villedor. This is all while hoards of zombies roam around the world, posing a constant threat for you and other denizens to deal with.

Zombie games that embrace their crafting systems like the Dead Rising series can often be really fun, adding an element of resource management that makes sense in post-apocalyptic settings. Dying Light 2 also manages to weave this into a fun melee combat system which puts you up close and personal with the scavengers and zombies of the setting. Instead of shooting guns into infected hordes, you use crazy weapons like an electrified glove-mounted knife or even the pyramid blade inspired by Silent Hill 2.

Telling the story of Lee Everett, Clementine, and other survivors of a zombie apocalypse, Telltale’s The Walking Dead is an odd beast of a zombie game but captures the nature of being a survivor in a gritty, bleak apocalypse perfectly.

This episodic series of games is very similar to its parent show in terms of being more about character dynamics and post-apocalypse desperation than being about the zombies themselves. It’s one of those “man is the true monster” narratives, but manages to do so in a way that feels fresh.

It’s also a great game for fans of the comic and the TV series. Besides cameos from characters like Glenn or references to the source material, the game also captures the painful and dark nature of the Walking Dead perfectly, often asking you to make painful choices in the game to ensure your survival. Choosing to put you and your allies’ safety above someone else’s, or weighing one person’s life over another, are common occurrences you’ll need to grapple with.

Granted, player mileage can vary with Telltale games. The frank truth is that the gameplay and your choices are far less interactive than they try to make you feel they are. However, that’s not a fatal sin. The feeling of playing a story and having some impact on its course is still there, and these games tell very emotional and often nuanced tales that will stick with even the most cold-hearted zombie game lover.

Metro Exodus is a rare Russian nuclear post-apocalypse story to find its way to the west. Based on a series of books written by Dmitry Glukhovsky, Metro takes place in the underground of Moscow, and involves escaping that underground to embark on a long journey via an above-ground railroad which leads to a vast and open experience.

Though the game’s zombies are known as mutants created via fallout rather than a viral outbreak, they’re still a terrifying zombielike force in a post-apocalyptic setting. You’ll spend your fair share of time outmaneuvering hoards of the decaying foes in order to survive, while they’ll pursue you intently in order to devour your untarnished flesh.

The different settings give Metro Exodus a chance to showcase the terrifying mutated wildlife that can attack the player as well. The memorable undead bear is only the tip of the iceberg for the types of zombified enemies you can battle against, and each serves to keep the combat encounters with undead assailants engaging and entertaining.

The Resident Evil 2 remake is a perfect example of what zombie games need to do to remain relevant.

Resident Evil has always understood that, on some level, Zombies should be individually scary, and this game nails that pathos. From the crawling Lickers, which can detect you based on your footsteps, to zombie dogs and the boss monsters of the game, there are a variety of uniquely terrifying enemies.

The Resident Evil 2 remake embraces the survival horror element of zombie games too. Using ammo always presents the chance to spike your anxiety, as you could be wasting it while a worse undead threat waits just around the corner.

Resident Evil 2 Remake is an extraordinarily good-looking game too, though in a zombie context that means something entirely different. The high-fidelity blood and gore mixed with gloomy lighting and oppressive environments make the game pop in the best way possible. There is an art to making video game zombies look grimy and gross, and this title understands this notion all too well.

Both games build upon the blueprints of the original games to similarly tense and engaging heights. Resident Evil 3 does a few things to differentiate itself though, such as putting a greater emphasis on action than exploration and being a little bit shorter than the previous game. And yet, a lot of the things from the previous remake are intact in Resident Evil 3. You have even more grotesque enemies to deal with, from regenerating Pale Heads to spindly insectoid Drain Deimos.

The Resident Evil 3 remake also makes a point of bolstering the original Resident Evil 3 enemy designs with more modern graphics. The game gives Nemesis a glow-up in particular, which takes the already scary-looking zombie juggernaut and makes him even more menacing. There is something lost by making Nemesis a lot more scripted than Mr. X was in Resident Evil 2, but there’s still something undeniably frightening and badass about an eight-foot tall zombie who can shoot you with a rocket launcher.

Carrying forward the first-person camera shift from Resident Evil 7, Village pushes the game toward being more of an action title with horror elements and segments. It also leans into European horror rather than American Horror for its inspiration, with touchstones that are less Chainsaw Massacre and Jason and more Dracula and Wolfman; which, thankfully enough, shows an exciting aesthetic twist on the previous game.

The zombies, as with most resident evil zombies, are still uniquely and creatively monstrous, and prove to be tough enemies to overcome. The bosses in the game, though, really push the boundaries of what previous Zombie bosses could be like. You have bosses like the psychic Angie, who spends her entire boss fight screwing with you in a section reminiscent of the previous game’s horror heights. You also have Moreau, who fights you in a section where he transforms into a fish-like monster and forces you to use the environment against him.

The Last of Us Part II

The maligned younger sibling of The Last of Us, the Last of Us Part II has been dogged by controversy for years. Whether it’s a lesser part of the series or greater than the original, though, is largely up to individual preference.

One thing that can be said fairly safely is that they push the zombie design in new and interesting directions in this game, with the Bloaters and the Rat King being two new and welcome additions. The former leans into the fungal horror aspect of the Last of Us infected, with fungal spores causing the shambling corpse to bloat and grow to explosive proportions. The latter, meanwhile, is a composite of infected that detaches zombies from itself the more it’s damaged, combining the overwhelming nature of being swarmed with the horror of a single amalgamation of rotting flesh.

In terms of capturing the same spirit of the apocalypse, The Last of Us 2 manages to top its predecessor in terms of bleakness. From the story to the visceral way you dispatch human enemies, there is a definite enhancement of the overall cutthroat and grim nature of the setting. The visual design also does a very good job of conveying the cities as abandoned and ruined, selling the long-term impact this zombie apocalypse has had on society.

For the most part, it focuses on the personal journey of Joel as he takes young girl Elle across the United States in the hopes of finding a cure for the zombie virus. Unlike Telltales Walking Dead though, this story-driven game doesn’t slack in the gameplay department. You’ll play an active role in each zombie confrontation, weighing whether to risk getting close enough for a melee attack or expending ammo to deal with Clickers more safely.

The original game has also been remastered and updated not once, but twice for the PlayStation 4 and the PlayStation 5 respectively, which should give you a hint as to it’s quality.

If more intimate zombie horror is what you want, then Resident Evil 7 is the perfect game.

This is because Resident Evil 7 doesn’t see you taking on an endless flow of shambling corpses. Instead, there is a focus on several boss characters who represent the horror of deathlessness and rot in a way few zombie games can emulate. Bosses like Jack have a spine-chilling habit of getting up after you think you’ve managed to kill them during a difficult fight. That combined with the way he menacingly walks towards you with all the implacable weight of a terminator makes him a really anxiety-inducing foe of the undead variety.

Resident Evil 7 is an uncomfortable game at times too, and that is to its credit. A majority of the experience is set within this decrepit, decaying house of horrors and the horror of this vile environment played to terrifying effect. The Baker Household has a laundry list of gross, disgusting things designed to make your skin crawl, from rotting detritus to insect swarms, and it all captures the feeling of being in an unpleasantly gross place you have no choice but to push through.

It makes sense that this game helped kick off a renaissance for the series that has led to a great sequel and the reclaiming of a lot of the elements that the older entries nailed.