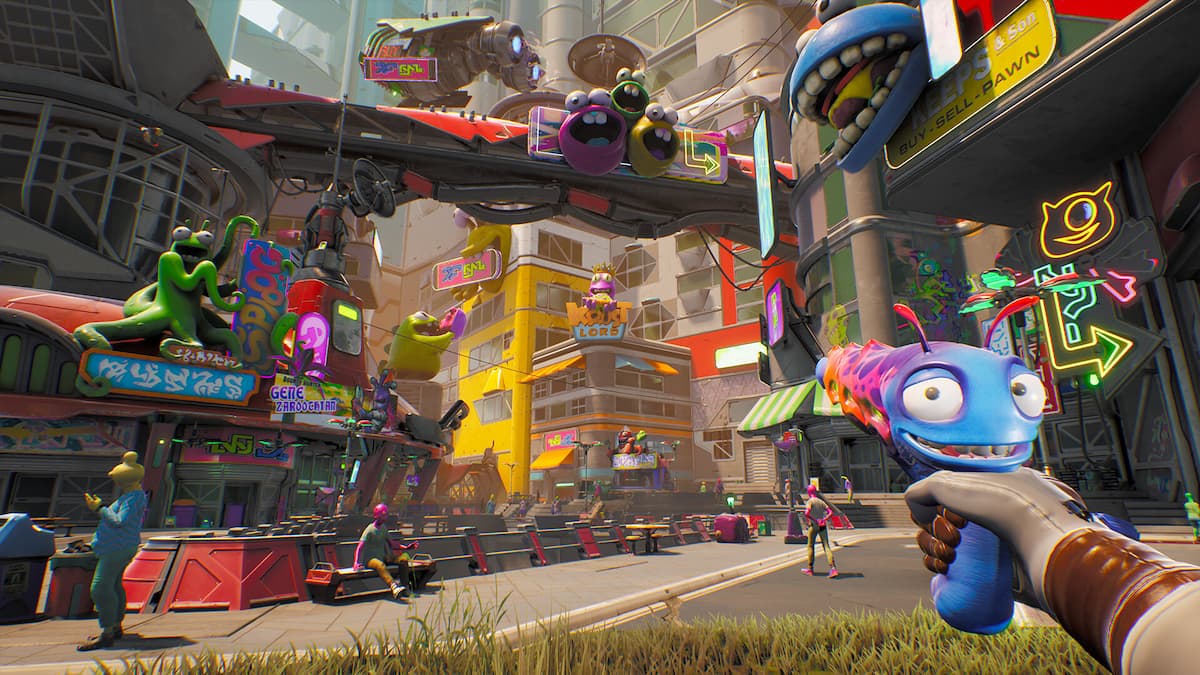 High on Life on PC

During his playthrough of Squanch Games’ High on Life, well-known streamer and Moist Esports owner, MoistCr1TiKaL, pushed an NPC off the side of the map and watched him fall to his death. This NPC held semi-important information needed to progress in the story, and while descending into the abyss, the NPC proclaims something along the lines of, “Okay, I guess you don’t need my help then.” High on Life is very aware it’s a video game, and MoistCr1TiKaL’s start to his journey serves as a perfect example of what kind of game you’ll encounter when you embark on this adventure.

High on Life comes from the masterminds behind the hit animated TV show Rick and Morty. While their parents are on vacation, a brother and sister are transported to a different galaxy as Earth and humanity become enslaved by an alien cartel that aims to use humans to create drugs from the latter. You assume the role of the brother; your goal is to take down the cartel with the aid of a legendary bounty hunter and a species of talking weapons called Gatlians.

Over the course of 10 or so hours, you’ll be tasked with traveling to different locations and hunting down various members of the alien cartel. High on Life is primarily a first-person shooter as the Gatlians assume various forms of weapons, such as your starting companion Kenny serving as a handgun. Each Gatlian boasts unique capabilities, with Kenny shooting a giant glob of slime that will launch enemies into the air. From there, you can infinitely trap an enemy in the air by repeatedly shooting at them until they are defeated. Base fire for the Gatlians is unlimited, while their unique ability recharges over time at various speeds, depending on whether you are in combat or not.

Going off of the Gatlians, the abilities they boast aren’t exactly over the top or anything that’ll blow your mind as they’re spins on abilities you’ve seen in other games. However, I did enjoy their addition to the formula as their abilities were cool to use, and the game has solid FPS mechanics. I will note that the cool factor started to wear off after a few hours, but that’s more indicative of the combat loop as it doesn’t change aside from the weapons you use to defeat your foes. It does just enough to keep you engaged, but not enough to make you think too hard. Outside of combat, High on Life struggles quite a bit.

Your goal is to travel to various worlds to defeat the members of the alien cartel, and the actual process of doing it is repetitive. You’ll pick up a bounty, head to a location, travel through a semi-open space, explore every inch, defeat the boss, and then return to your base of operation to then do it again. You’ll earn pesos for completing bounties, or that can be found through hidden chests, which, in turn, can be used to upgrade your guns and your suit. Upgrade your Gatlians to shoot and reload faster, or spend them on yourself so you can dash out of danger or to aid in platforming.

It’s a standard loop held together by Metroidvania elements, as some pathways are gated off until you earn newer Gatlians or items. This loop works, but it gets stale quickly as this is a loop that would you expect for a game released on the PS3. On a less critical note, I found enjoyment in the gameplay because there’s something relaxing in the simplicity of the loop. However, it can get old quickly and is something to note for fans expecting something unique or game changing.

One factor that offset the boredom of the loop was the art style present in High on Life. There was a point early in the game where I was genuinely concerned that this game would not look good, as the less-than-stellar design takes away from the experience. Fast forward a few minutes and galaxies later, and it’s safe to say I was wrong.

The world design is incredible and a reflection of the creativity seen in Rick and Morty. The first city you travel to, Blim City, is a sprawling metropolis full of neon lights and absurd commercials on every tv set. The next world I visited was a dense jungle with Care Bears looking to rebel against the gang that took them hostage, with each locale in that jungle beautifully designed. Each world looks fantastic, and the Gatlians look just as good. Also of note, the game runs very well on PC, as I only had a few instances of frame drops, which is superb in this day and age.

So, up to this point, the gameplay loop in High on Life is serviceable, and it looks great with my playthrough not impacted by bugs or performance issues. What will ultimately make or break your experience is your tolerance to the dialogue you’ll be subjected to throughout your time playing this game.

Animated sitcoms like Rick and Morty or Family Guy aren’t a hit for everyone, as they’re home to various brands of humor that come off as dark or painfully aware of their surroundings. It becomes obvious upon meeting Kenny, voiced by Justin Roiland, AKA Morty from the TV show, that this game will be a near one-to-one recreation of the show. If you’ve never seen the show, picture Starbreeze Studios’ hit title The Darkness, but Jackie Estacado doesn’t speak, and his abilities are talking guns voiced by Deadpool for 10 hours. Also, keep the bloodthirsty aspect of the Darkness’s powers, but replace them with alien guns who can speak instead of raging demons.

Your protagonist is silent, meaning the Gatlians will be your source of commentary and interaction with other NPCs or in combat. Silent protagonists are my least favorite gaming trope, as it’s a trend of the past that I thought the industry left behind. However, with this being the direction Squanch Games choose to go with, each Gatlian has a unique personality and a brand of humor, opening up a lot of interesting moments.

Many jokes or dialogue moments will be aggressive or raunchy, with the Gatlians commenting on their desire to kill, pleasure-inducing moments or a mixture of both. Other moments involve the game blatantly acknowledging it’s a game, with NPCs arguing and endlessly ripping expletives at each other. If you walk away and come back to said NPCs, they are still stuck on the expletive loop. It is very much Rick and Morty, for better and for worse, but I found it enjoyable because this game is very aware that it’s a video game and must be treated as such.

High on Life is quite the product; if you love Rick and Morty, you’ll enjoy this game, no questions asked. The humor is a one-to-one replica of those 20 minutes you’d get by watching any episode, highlighted by the same style of humor, and Justin Roiland masterfully delivering his signature Morty albeit in a different surrounding. The gameplay is a solid take on the Metroidvania formula, boosted by the Gatlians and their multipurpose abilities. However, playing the game is a bit of a slog, which is where not being familiar with Rick and Morty will hurt your playthrough as you listen to the same jokes and awkward deliveries for 10 hours.

Ultimately, I would recommend High on Life, but if you do, go into it with the mind that it’s a video game with a sense of humor that may fall short on you. Despite feeling a bit dated and some jokes missing their mark, I’m looking at you alien “fluids” seller, the game works despite how dated the actual gameplay is. Plus, its inclusion on Game Pass is reason enough why you should play it. Worst case scenario, you turn it off and only spend a few hours learning about how your nameless protagonist and Morty, I mean Kenny, saved the human species with a bunch of talking guns. 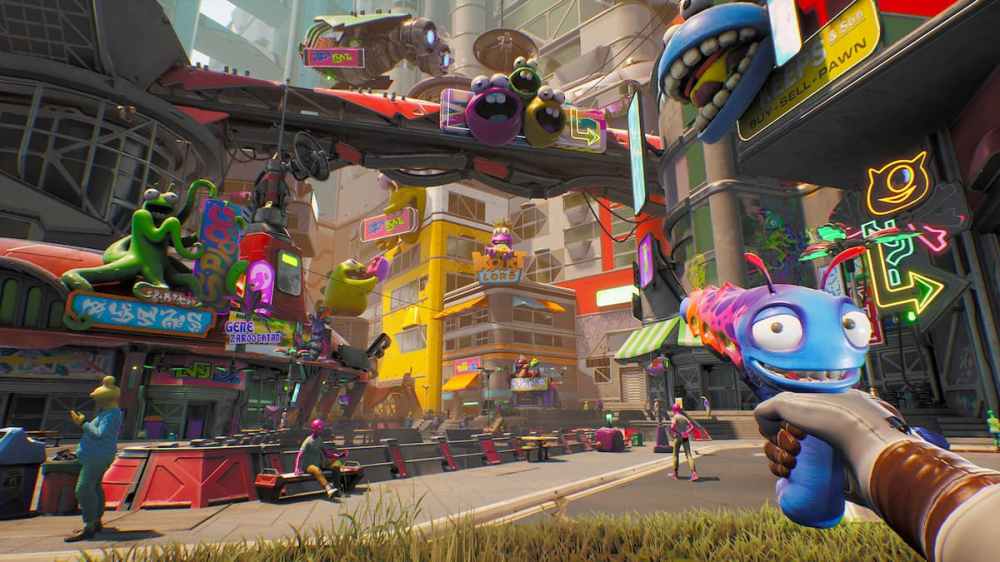