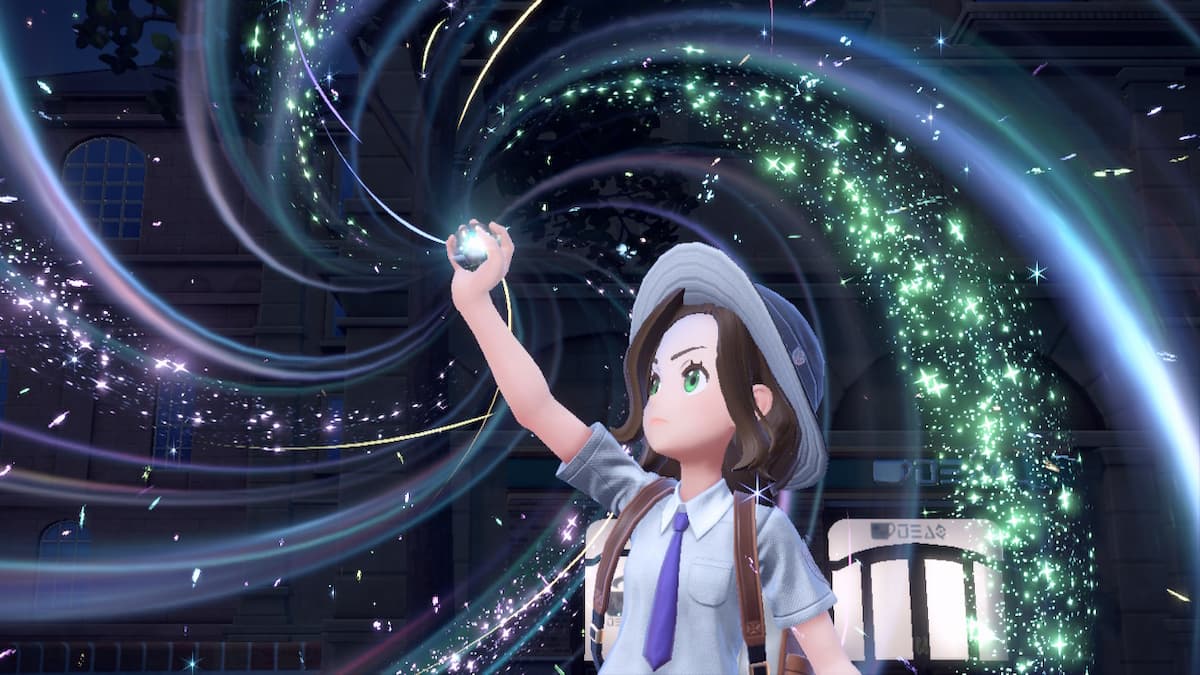 Everyone is starting to get ready for the jump into competitive battling in Pokemon Scarlet and Violet. However, the decision to try out the competitive scene comes with the troubles of team building and training your Pokemon to perfection. If you’re looking for a speed-based Pokemon to add to your team and help get the upper-hand over your opponent, look no further. We’ve got all the information you’ll need. Here’s the 10 speediest Pokemon for your Scarlet and Violet team.

Talonflame is a Fire/Flying Dual-Type Pokemon and among the previous Generation specimens to return in the Paldea Region of Pokemon Scarlet and Violet.

Talonflame has a Speed stat of 126, making it one of the fastest Pokemon in the game. Combining this stat with its Flame Body Ability can be useful in battle when inflicted during a strong attack such as Brave Bird, potentially burning the opponent for extra damage.

Other moves that should be considered alongside this are Flare Blitz for strong Fire-Type damage, Swords Dance to set up and boost its Attack, and Will-O-Wisp to inflict Burn on strong physical attackers with Talonflame’s high speed before they have a chance to do anything.

Jolteon is the Electric-Type evolution of Eevee, and carries a Speed stat of 130. Not only is Joleteon one of the fastest Pokemon in the game due to this, but its Quick Feet Hidden Ability provides the potential to boost this Speed even further in battle, increasing the stat by 50% whenever Jolteon is affected by a status condition.

To make the most out of Jolteon in competitive battling, you’ll want to prioritize its capability with Sp. Atk. This means a Modest or Timid nature will benefit you the most. A strong move set you’ll want to consider is Shadow Ball, Tera Blast, Thunderbolt and Volt Switch. This makes the most of Jolteon’s ability to apply pressure with strong damage due to its high Speed.

Additionally, obtaining a Jolteon with an Ice Tera Type adds more versatility against opponents that out-speed it, and allow for some heavy damage opportunities with the use of Tera Blast.

Miraidon is the box art Legendary and Version Exclusive of Pokemon Violet, and it boasts a speed stat of 135. Miraidon is an Electric/Dragon Dual-Type Pokemon, so it is weak to the likes of Fairy Types and Ground Types.

To best combat this, you can run a move set consisting of Flash Cannon, Parabolic Charge, Metal Sound and Electro Drift. You can make good use of this set by using Metal Sound to lower your opponents Special Defense, and then attack with your strong Electric-Type moves which will be further boosted by Miraidon’s Hadron Engine Ability.

When it comes to Miraidon, the best Nature for it is Modest or Timid. Modest provide a boost to Sp. Atk with a small nerf to Attack, while Timid boosts Miraidon’s Speed stat even further at a cost to Attack. While Miraidon is a suitable option for competitive ranked battle, keep in mind that you only receive its Battle Form at the end of the game, so you’ll have to wait until then to add one to your team.

Paralleling Miraidon, Koraidon is the Version Exclusive box art Legendary for Pokemon Scarlet. Much like it’s Violet counterpart, Koraidon also has a Speed stat of 135, but differs in its Dual-Typing of Fighting/Dragon and is extremely weak to Fairy type moves.

A recommended move set to run on Koraidon for battle is Swords Dance, Iron Head, Drain Punch and Collision Course. This way, you can boost Koraidon’s Attack power with Swords Dance, which will combine with the boost from its Orichalcum Pulse Ability to make it’s Fighting-Type moves cause devastating damage.

Just as Miraidon, Koraidon is only available in Battle Form at the end of the game. Because of this, you’ll probably want to opt for another Pokemon if you’re looking for a team to use during your playthrough. However, if its competitive play and ranked battle you have your eye on, Koraidon is a viable option to consider.

Chien-Pao is one of the Four Treasures of Ruin in Pokemon Scarlet and Violet, carrying a Dual-Typing of Dark and Ice. Chien-Pao also carries a strong Speed stat, sitting at 135.

By using Chien-Pao as your leading Pokemon, your enemy will be at disadvantage from the start due to Chien-Pao’s Sword of Ruin Ability which causes a Defense stat drop to all Pokemon on the field. To strongly follow up on this, a move set of Ice Spinner, Taunt, Crunch and Ice Shard is your best bet, with an Ice Tera Type providing a significant power boost to these moves.

As far as Natures go, you’ll want to try and obtain a Chien-Pao with a Jolly or Adamant Nature. Jolly will boost Chien-Pao’s Speed even further at a small cost to Sp. Atk, while Adamant will increase the Attack stat of Chien-Pao in exchange for a hit to its Sp. Atk.

Flutter Mane is one of the Paradox Pokemon exclusive to Pokemon Scarlet, and a Ghost/Fairy Dual-Type. Flutter Mane has significant power in its Speed stat of 135, but with its Ability of Protosynthesis, it has the opportunity to raise this by 50% in battle.

With Flutter Mane’s Speed being such a threat, building a strong move set is key to following up on the opportunities attacking first provides. For a strong offensive build, you’ll want to consider Shadow Ball, Moonblast, Icy Wind and Psyshock. Icy Wind provides control over your opponent’s speed, ensuring they never out-maneuver Flutter Mane, and Shadow Ball and Moonblast are strong STAB moves that hit hard for damage.

When using Flutter Mane in competitive battle, you’ll want to try and obtain one with a Nature of Modest or Timid, depending on if you’re looking to prioritize Speed or Sp. Atk. Modest will provide an additional boost to Flutter Mane’s Sp. Atk Stat, while taking a small decrease to Attack. On the other hand, Timid will further increase Flutter Mane’s Speed, and slightly decrease its Attack.

Iron Bundle is a Paradox Pokemon exclusive to Pokemon Violet, carrying a Dual-Type of Ice/Water and a Speed stat of 136. Due to Iron Bundle’s high Speed, it has the opportunity to attack fast for high damage.

The best Nature you’ll want to consider for Iron Bundle is Timid, which further boosts its Speed at a small cost to Attack, or Modest, which boosts Sp. Atk with a cost to Attack.

To run Iron Bundle with the most efficiency, a move set consisting of Ice Beam, Hydro Pump, Flip Turn and Freeze-Dry is your best bet. Flip Turn allows Iron Bundle to break the likes of Disguise and Substitute and safely switch to a suitable counter, while Hydro Pump and Ice Beam allow for solid damage output against a wide range of opponents.

Barraskewda is a Water-Type Pokemon and one of the selected previous Generation specimens to return to Pokemon Scarlet & Violet’s Paldea Region. Despite being a small little fish, Barraskewda packs a punch with its Speed stat of 136.

To further make the most of Barraskewda’s high Speed, obtaining one with the Swift Swim ability is the best option. With Swift Swim, Barraskewda’s Speed will be doubled in the rain, meaning that including Rain Dance in its move set provides the perfect setup to follow with strong Water-Type attacks.

The most suitable Natures to consider for Barraskewda in order to make a splash in competitive battles are Adamant, to boost Attack at a small cost to Sp. Atk, or Jolly, to further increase Speed at the cost to Sp. Atk.

A move set of Close Combat, Liquidation, Psychic Fangs and Rain Dance allow Barraskewda to best capitalize on its high Speed and deliver heavy damage. By setting up with Rain Dance, you’ll activate Swift Swim and double Barraskewda’s Speed. From here, you can attack with Liquidation for strong STAB, or Close Combat and Psychic Fangs for strong damage against enemies resistant to Water Type moves. Psychic Fangs can also be used to break through and counter barrier moves as a bonus, making Barraskewda a viable and versatile choice for a Speed-based team member.

Dragapult is one of the most popular Pseudo-Legendaries and a powerful Dragon/Ghost Dual-Type asset to add to your team in Pokemon Scarlet and Violet. With a Speed stat of 142, Dragapult naturally out-speeds almost anything, giving it huge potential for competitive battling.

To best maximize on Dragapult’s capabilities, a Naïve Nature is recommended, as this will further boost Dragapult’s Speed at a small cost to its Sp. Def. For a moveset, Dragon Darts, Phantom Force, Fire Blast and U-Turn offer the most power and versatility for ranked battle.

Keep in mind that obtaining Dragapult can be a little more difficult to obtain for Pokemon Scarlet gamers, as its pre-evolutions, Dreepy and Drakloak, are Pokemon Violet exclusives. This means Pokemon Scarlet owners will have to find a trusted friend or trading partner who own Pokemon Violet to trade one over to their game.

Finishing off the list as the fastest Pokemon in Scarlet and Violet is Electrode, the explosive Generation 1 Electric-Type. Electrode has a Speed of 150, out-speeding every other Pokemon of Generation 9.

When it comes to building Electrode for competitive battle, you’ll want to consider a Modest or Timid Nature, as the prior boosts Sp. Atk at and takes a nerf to Attack, while the latter boosts Speed at a small cost to Attack.

Light Screen, Taunt, Discharge, Explosion and Volt Switch are all viable moves to use with Electrode. Light Screen allows Electrode to take reduced damage from Special Attackers, allowing it more time on the battlefield to do deal heavy damage with the likes of Discharge and Explosion. Alternatively, you may choose to include Volt Switch instead of Explosion to keep Electrode alive for longer, as the latter results in Electrode fainting after use.

That’s everything you need to know about the 10 speediest Pokemon for your Scarlet and Violet team. For more helpful lists, tips, and gameplay guides, check out our other content. We have a variety of topics that can help you on your journey in the Paldea Region and answer any questions you may have, such as how to catch Scyther and evolve into Scizor and Kleavor, 10 strongest returning Pokemon to use, and all Mystery Gift codes.