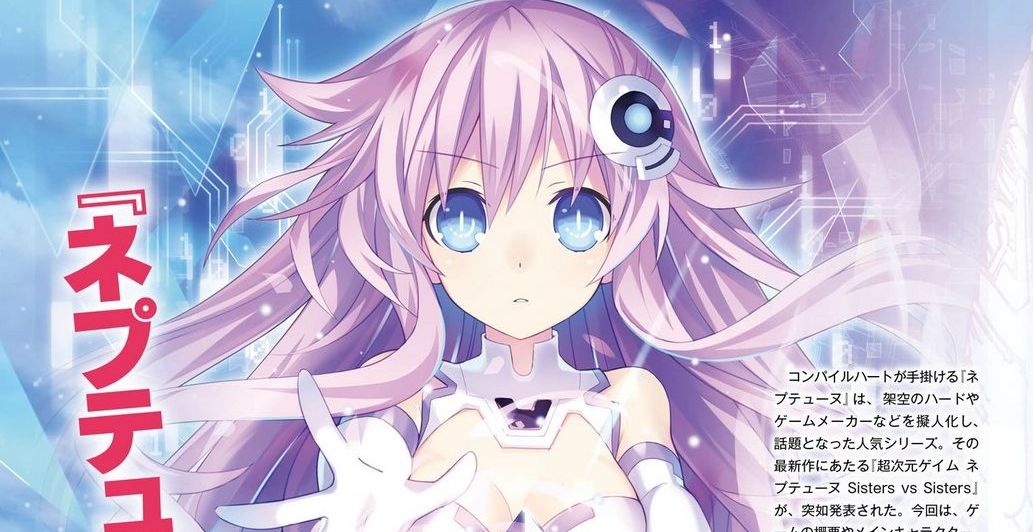 The game is coming to PS5 and PS4 and will release in Japan on April 21, 2022. Compile Heart also revealed that development is currently 70% complete.

It’s a JRPG focusing on Nepgear, Uni, Ram, and Rom, younger sisters of Neptune, Noire, and Blanc. It’s also described as another spin-off game for the series.

The story will prove hilariously familiar to many JRPG fans annoyed by a certain semi-recent gaming trend.

The CPU candidates wake up after having been in a deep slumber for two years. The world has been invaded by smartphones and everyone has the latest model named “Magiphone.”

This has started the “Buzzle” phenomenon, triggering an invasion of monsters in Planeptune, while the older sisters seem to have disappeared.

This is a story of destruction and rebirth for the Goddesses raising from despair to a future of hope.

As usual, the storytelling is done with a visual novel-like portion of the game with 2D illustrations, while the 3D models have been redesigned. It’s an “evolved form” from previous Neptunia games.

Battles are fought in real-time with three characters in the party. You control one and the other two are controlled by the AI, but you can switch at any time.

The system involves skills that can be activated with a single button and can be chained by switching characters and activating another afterward. Tactical Skills, on the other hand, are actions that consume a dedicated character-specific gauge that fills up over time. It’s a good idea to control another character as it does.

EXE Drive skills also return as special moves that consume a special gauge. When you use them, a flashy effect is triggered and you can wipe out many enemies at once. The girls can also power up as goddesses changing their appearance and increasing their stats for a certain period of time. In this form they can also activate combos freely.

The world includes a variety of fields designed in full 3D like cities, plains, swamps, and forests. You can explore Planeptune freely and the interior of the Planeptower. The PS5 version uses haptic feedback to enhance the sense of presence.

Below you can check out all the new images.