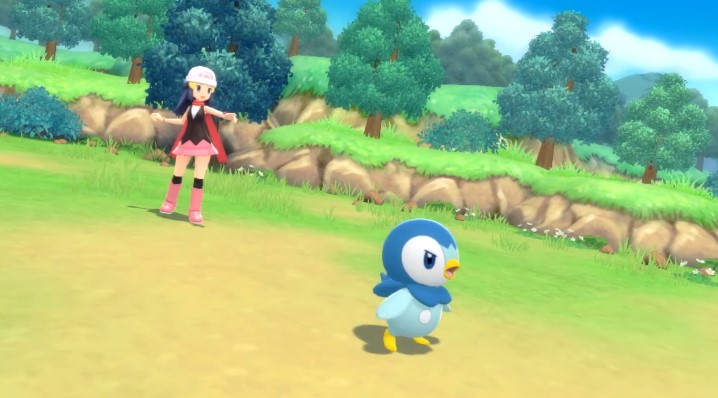 Earlier today during the Pokemon Presents livestream, there was a massive trailer showcasing the upcoming fourth-gen remakes, Pokemon Brilliant Diamond and Shining Pearl. Most of the content appeared to be the same as the DS games, but there were a few new features sprinkled in here and there.

The first trailer essentially just shows off everything from the original games that set them apart from the past and future generations. But a keen eye of a seasoned Diamond and Pearl fan may immediately notice something behind the player character.

It was essentially glossed over in this trailer, but the partner Pokemon feature will be returning in Briliant Diamond and Shining Pearl. Another pair of DS games — Heart Gold and Soul Silver — brought this feature back years ago and it has shown up in random titles since then as well. It’s a feature that Pokemon fans often ask for when it’s not present in a game.

Another returning feature in Pokemon Brilliant Diamond and Shining Pearl is the Great Underground. Just like in the original games, the Sinnoh region has a massive underground cave system to explore where you can excavate items and build your own Secret Base. However, there’s a new wrinkle in this feature that wasn’t present in the original titles.

Pokemon Hideaways are hidden areas underground where you can encounter wild Pokemon. The creatures that appear in these areas directly correspond with the statues that you have in your Secret Base. And it was confirmed that certain Pokemon can only be found in these Hideaways. As of right now, there’s no indication which ‘mons will be only found in the Hideaways.

Next, Pokemon Contests in Brilliant Diamond and Shining Pearl have been revamped for the remakes, but it appears to be mostly visual. There appears to still be a dancing portion where you have to time button presses as well as a contest move portion. Instead of the sprites in the original games, full 3D models are used.

Finally, the last big change from the original games is the introduction of customizable outfits. In the original DS games, you were just stuck with the default clothes of Dawn or Lucas. But this time around, you’ll be able to buy whole outfits for your character so you can look more stylish in battle, at contests, or just running around in the tall grass.

Pokemon Brilliant Diamond and Shining Pearl release on Nov. 19 for Nintendo Switch this year. If you would like to check out the full official trailer that was released today, you can find it right here or down below.