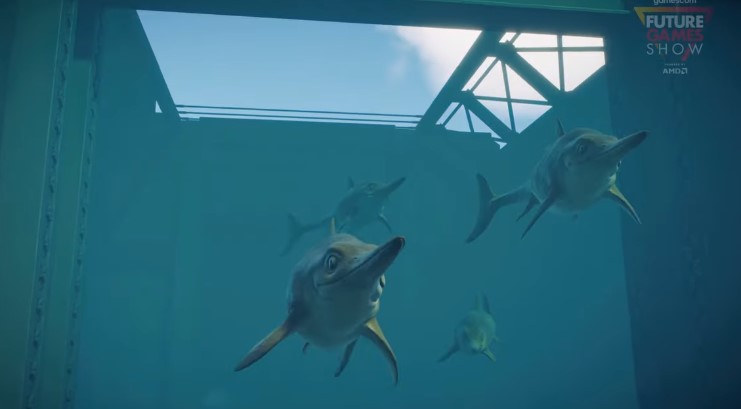 Earlier today during the Future Games Show, a brand-new trailer for Jurassic World Evolution 2 was revealed. This trailer featured the commentary of Jeff Goldblum (and a brief story about his snorkeling escapades) as well as two new dinosaur species.

Game Director, Richard Newbold introduced Jeff Goldblum and then quickly jumped into some brand-new footage of a light drizzle in the temperate environment. Rain, snow, and sandstorms are just a few of the weather-based challenges that park builders will have to come face-to-face within Jurassic World Evolution 2.

Next up were the new dinosaur species coming to the game. And the first one revealed in some underwater footage was the ichthyosaur. This is where Goldblum shared his story about snorkeling and seeing a barracuda in the water. But unlike that predator, Newbold assured Goldblum that this underwater creature isn’t interested in eating humans.

From the water to the skies the next new species reveal was the imposing cearadactylus. This massive flying dinosaur has a long beak and sharp teeth to pull fish out of the water even if they’re a few feet deep. At the same time, it’s still able to keep its eyes above water to help it stay aware of its surroundings at all times.

Jurassic World Evolution 2 is coming to PS4, PS5, Xbox Series X|S, Xbox One, and PC via Steam and the Epic Games Store on Nov. 9 of this year. If you’re excited to check out the game, it is currently available for pre-order. You can watch the official new dinosaur trailer for Jurassic World Evolution 2 down below. For more information on the game, you can check out the official website.

And if that one trailer has you excited about more video games, then check out the full Future Games Show stream down below.