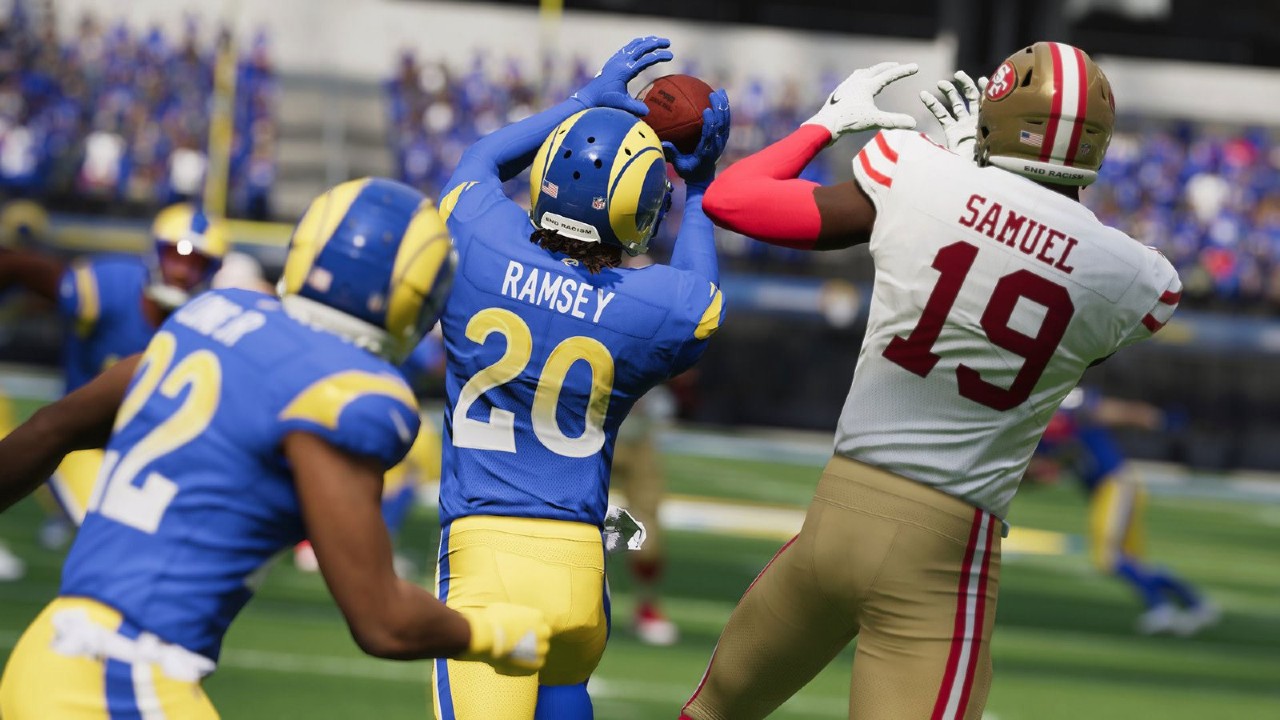 Madden NFL 22’s “Lockdown Corner” achievement requires you to win three presses in a single game, using the same cornerback. It is one of the few achievements in the game that you unlock by performing something in a match, and is arguably the most difficult of the bunch. For those who aren’t too familiar with American football, a press is a match-up between the receiver and the cornerback, where the corner stays pressed up against the receiver along his route to leave him with little space to catch. Your objective is to shut down three routes with this type of coverage, using the same player.

Like other achievements in this games, there’s a cheese method to unlock this with little hassle, which involves changing some penalty rules, and also using two controllers if you have two available. If not, you can play with a friend online and take turns getting the achievement, or do it against the AI, although this is much more difficult. Guides will be detailed for both the two-controller/player method and the AI method. If you’re playing on the Series X|S, you’ll be treated to 40 Gamerscore, and Xbox One players will get 50.

How to Unlock “Lockdown Corner” in Madden NFL 22

In the main menu, head to the far right and open the settings tab. Under “Penalties”, set “Offsides” to zero, which will remove that penalty from the game entirely, meaning you can line up over the line of scrimmage, as long as you don’t touch an offensive player before the snap. Start an exhibition match with your main account playing as the Rams, and your second controller playing as the Jets. The Rams have a very strong secondary, which will make this a bit easier, and the Jets are the Jets.

Don’t change any of the match settings, and begin the match. You’re going to want to put the Jets on offense, so make sure they are receiving the kick after the coin toss. On the first play from scrimmage, you want the offense to run a “Four Verticals”, which can be found under Concept > Deep Pass > Verticals. As for the defense, go to Play by Type > Man Coverage, then select any play that ends with “Press”.

Cycle through defensive players until you’re playing as Jalen Ramsey (#20), then line him up close to a receiver. Click in on the right thumbstick, then press A to do an individual adjustment. Press down on the right thumbstick to select “Underneath”. This part is a bit tricky, as you’ll be jumping between controllers a bit. Snap the ball with A on offense, then immediately hold down on the left stick and press A with Ramsey to execute a jam against the receiver. Ideally, this should throw them off balance as they try to run their route.

Luckily, this is all you have to do. You do not need to throw the ball to that receiver. You can actually just leave the quarterback to get sacked. If you can successfully throw a receiver off balance three times with one corner, you’ll get the achievement. If you find the Rams on offense, simply punt or run it backwards for a safety to put Los Angeles back on defense. After three press wins, you’ll earn the achievement.

If you have just the one controller, you’re going to have to do this achievement against the AI, however the methodology is mostly the same. Follow along with the two controller method, but with these few small changes. For one, you can’t control what play the offense is running, so simply line Ramsey up with the nearest receiver and attempt to jam them. It won’t always be a press-friendly play, so this will largely come down to luck of the draw, but with four quarters to do it, you should be able to make three press wins happen.

If you end up on offense, just like before, punt the ball to the Jets or run it backward for a safety to turn it over. The more time you spend on defense, the better your chances of getting three press wins throughout the game. It doesn’t need to be the same receiver every time, so just keep jamming away on whoever you can find until the achievement pops.

Getting “Lockdown Corner” out of the way early will really open the door to complete Madden NFL 22, as it’s one of the more annoying achievements in the game. Unfortunately, there are two achievements in the Series X|S version that are completely busted at the moment, “Momentum Seeker” and “Under Control”, though they will surely be fixed soon. These two achievements are missing on the Xbox One, so you old-gen users can knock out that completion today.