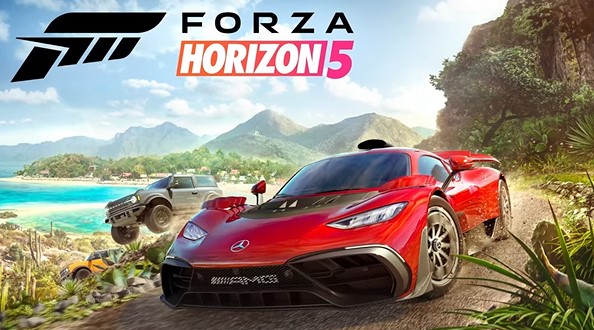 Earlier today during the Xbox Gamescom 2021 stream, a new Forza Horizon 5 trailer showed off the cover art for the game as well as the first few minutes of the game featuring a handful of incredible cars in the extremely diverse biomes of Mexico.

To start, a special Xbox Series controller was revealed with art inspired by Forza Horizon 5 and its setting in Mexico. The bright colors are reminiscent of the eye-catching colorful buildings scattered throughout the city of Guanajato.

But then right after that, they got into the big reveal of the day, the cover art and the vehicles which will be featured on the front of the game case. First up was the Mercedes AMG 1 with a striking red paint job. And digging through rough terrain in the background is none other than a couple of 2021 Ford Bronco Badlands.

But that’s not all there is to know about the Mercedes AMG 1. This will be the first vehicle in the history of Forza Horizon to feature F1 hybrid technology that can change the way the vehicle runs based upon whether you prefer smooth paved roads or if you want to go through some rougher courses.

Then, an incredible sequence showing off the first eight minutes of Forza Horizon 5 gameplay featured four different vehicles dropping out of cargo planes and multiple biomes. It all started out from the highest point on the map and raced all the way down to the main Horizon Festival center.

First, the Bronco dropped out of the cargo plane near the top of the volcano and rushed down the side of it with ease. There aren’t many other vehicles that can handle that rough terrain as easily as this massive SUV does.

Next, we saw the 2020 Corvette Stingray drop down from the cargo plane and absolutely tear up sand in one of the desert biomes. At one point it even met a sand storm head-on like it was no problem.

From a sandstorm to the jungle, the Porsche 911 Desert Flyer was up next. It was a bit of a rough landing for the car dropping out of the plane and parachuting through the trees. But the Porsche handled it like a champ and looked right at home going through the muddy and wet terrain.

Last but not least, the Mercedes AMG 1 dropped onto the scene from the cargo plane and it scorched along the coast as the plane flew through the sky. As they all approached the Horizon Festival center, the AMG 1 even managed to outspeed the cargo plane flying just overhead.

You can check out the Forza Horizon 5 trailer featuring the first eight minutes of gameplay down below.

Forza Horizon 5 Is coming to Xbox Series X|S, Xbox One and PC on Nov. 5. You can find the official cover reveal trailer for Forza Horizon 5 down below.

And if you can’t get enough Xbox reveals, then take a look at the full Xbox Gamescom 2021 Show below.