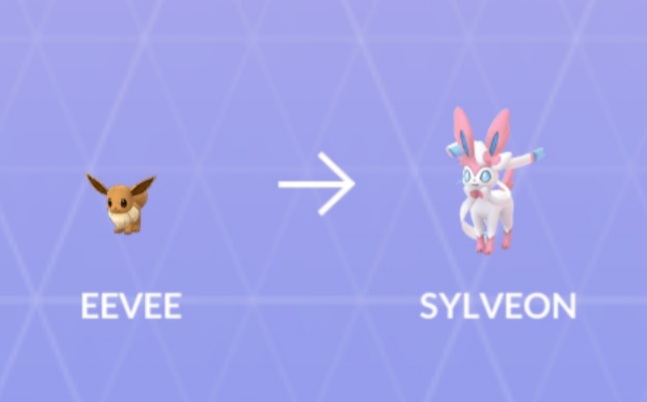 The final Eeveelution has finally made its way into the world of Pokemon GO. This pastel pink, off-white, and powder blue Fairy-type is one of the most adorable Pokemon in the game, but it’s also a formidable battler that you’ll absolutely want to add to your team. Here’s everything you need to know about how to evolve Eevee into Sylveon in Pokemon GO.

How To Evolve Eevee Into Sylveon in Pokemon GO

If you’ve already added Jolteon, Vaporeon, Flareon, Umbreon, Espeon, Leafeon, and Glaceon to your collection, then you likely already know one of the ways to evolve Eevee into Sylveon in Pokemon GO. The other, more complex method will require some work and potentially a lot of berries.

Either way, you’ll need to have 25 Eevee candies to evolve it into Sylveon. But since Eevee has been around since launch, you should be good to go.

This is the classic trick that was discovered back when the game launched in 2016. Giving your Eevee a certain name would make it evolve into a specific Pokemon instead of just randomly evolving into Jolteon, Flareon, or Vaporeon. Unfortunately, this method can only be used once.

To evolve Eevee into Sylveon using the naming method, all you need to do is put the name “Kira” one of your Eevee. The question mark on the evolve button should change to a silhouette of Sylveon. If it does not, then you may need to close your app and restart it. And just to reiterate, this method for evolving Eevee into Sylveon can only be used one time, so choose your Pokemon wisely.

This is going to be the standard method that you’ll use when making an Eevee evolve into Sylveon. Every Eeveelution after the first three has some kind of special requirements for evolution, and Sylveon is no different. But this is the first evolved form of Eevee in Pokemon GO that requires you earn a certain number of hearts with your buddy. That magic number is 70.

Once Eevee is your Buddy Pokemon, you’ll just need to earn hearts by fully feeding your buddy, taking pictures of them, or petting them. Once you earn 70 hearts with your Eevee, it’ll become your Great Buddy. More importantly, you’ll be able to evolve the Eevee into Sylveon. Just like with the naming method, you’ll see the question mark on the evolve button turn into a silhouette of Sylveon.

As of right now, we can’t confirm if the Umbreon/Espeon evolution requirements have priority (walk 10km) over getting 70 hearts, but we’ll update this section as soon as we figure it out.

Here’s a quick breakdown of the ways you can evolve Eevee into Sylveon in Pokemon GO:

That’s all there is to know about how to evolve Eevee into Sylveon in Pokemon GO. If you missed the announcement of Sylveon’s debut and the corresponding event, then go check it out right here.