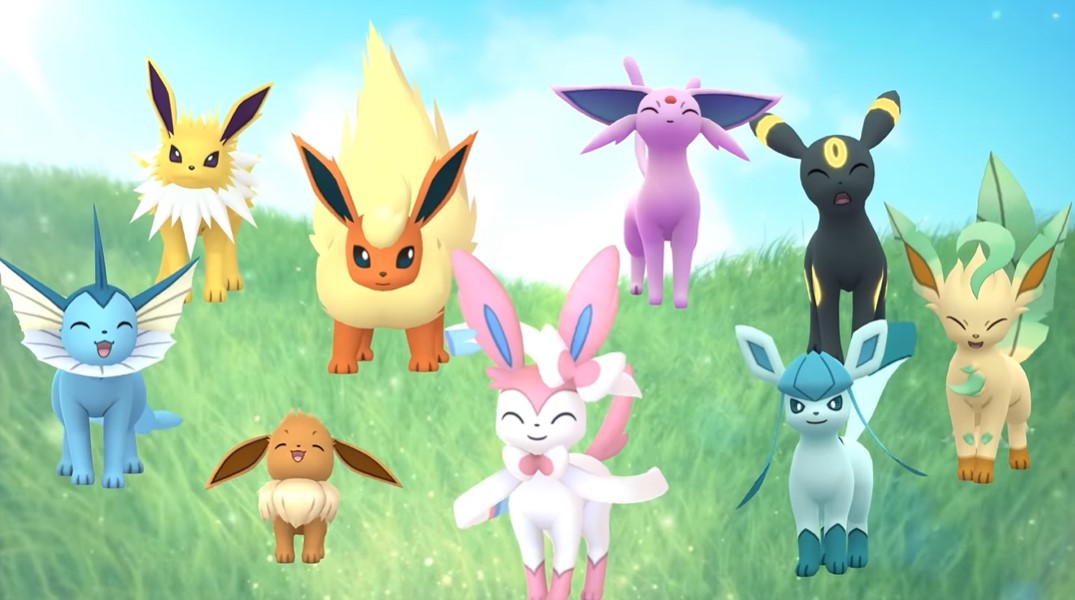 Earlier today on Twitter and YouTube, it was announced that the final member of the Eevee family, Sylveon, will be making its way to Pokemon GO. It was just a matter of time since Pokemon from the Kalos region started appearing in the game about five months ago.

The trailer starts out with Eevee and all of its evolutions from the Kanto region (Jolteon, Flareon, Vaporeon) and the year 2016 stretching across the top of the screen. Then it flips over to 2017 and we see Espeon and Umbreon from the Johto region replace those three evolutions. After that, we see 2019 with Leafeon and Glaceon. And finally, 2021 shows up and we get our first look at Sylveon’s Pokemon GO model followed by a shot of the whole group.

After the trailer shows off all of the Eeveelutions, it gets into the details of an event that will feature “Eevee and friends” later on this month. This yet-to-be-named event will start on May 25, but no end date was announced. Details on the length and features of the event are likely to come at a later date.

During this event there will also be Sylveon-themed avatar items available in the Pokemon GO Shop. Only two items appear to be shown off in the trailer. One is a white hoodie with Sylveon’s ears and partially pink sleeves that imitate the appearance of Fairy-type’s legs. There are also pink, white, and blue shoes that match the color scheme of the latest Eeveelution.

The trailer doesn’t get into any details on how to evolve Eevee into Sylveon, but the Twitter post indicates that you’ll be able to do it after gaining enough hearts with an Eevee as your buddy. This is a bit different than the way the evolution works in the mainline games where your friendship level with Eevee must be high and it needs to level up while knowing a Fairy-type move.

You can check out the full Sylveon trailer in the Pokemon GO Twitter account’s post right here.