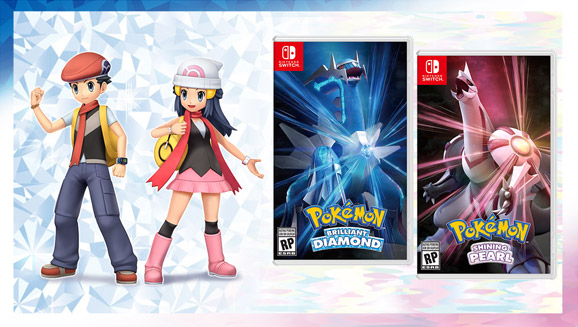 The official Pokemon Twitter account has just revealed the release date and box art that we can expect for the upcoming Brilliant Diamond and Shining Pearl. Both games will release on the Nintendo Switch later this year on November 19.

Pokemon Brilliant Diamond and Shining Pearl will be remakes of the generation four Pokemon games Diamond and Pearl. They were announced earlier this year with a trailer featuring a nostalgic top-down art style.

If you’re not familiar with the games, here’s what the official website has to say about them:

Adventures in the Pokemon Brilliant Diamond and Pokemon Shining Pearl games will take place in the Sinnoh region. Rich in nature and with Mount Coronet towering at its heart, Sinnoh is a land of many myths passed down through the ages. You’ll visit many different locations in the Sinnoh region, while striving to become the Champion of the Pokemon League.

The box art has also been revealed. They feature the legendary Pokemon Dialga (in Pokemon Brilliant Diamond) and Palkia (in Pokemon Shining Pearl).

If you want to learn more about these games, see some screenshots, watch the trailer, and view the box art in high definition, head to the official website right here. They are also now available for pre-order.