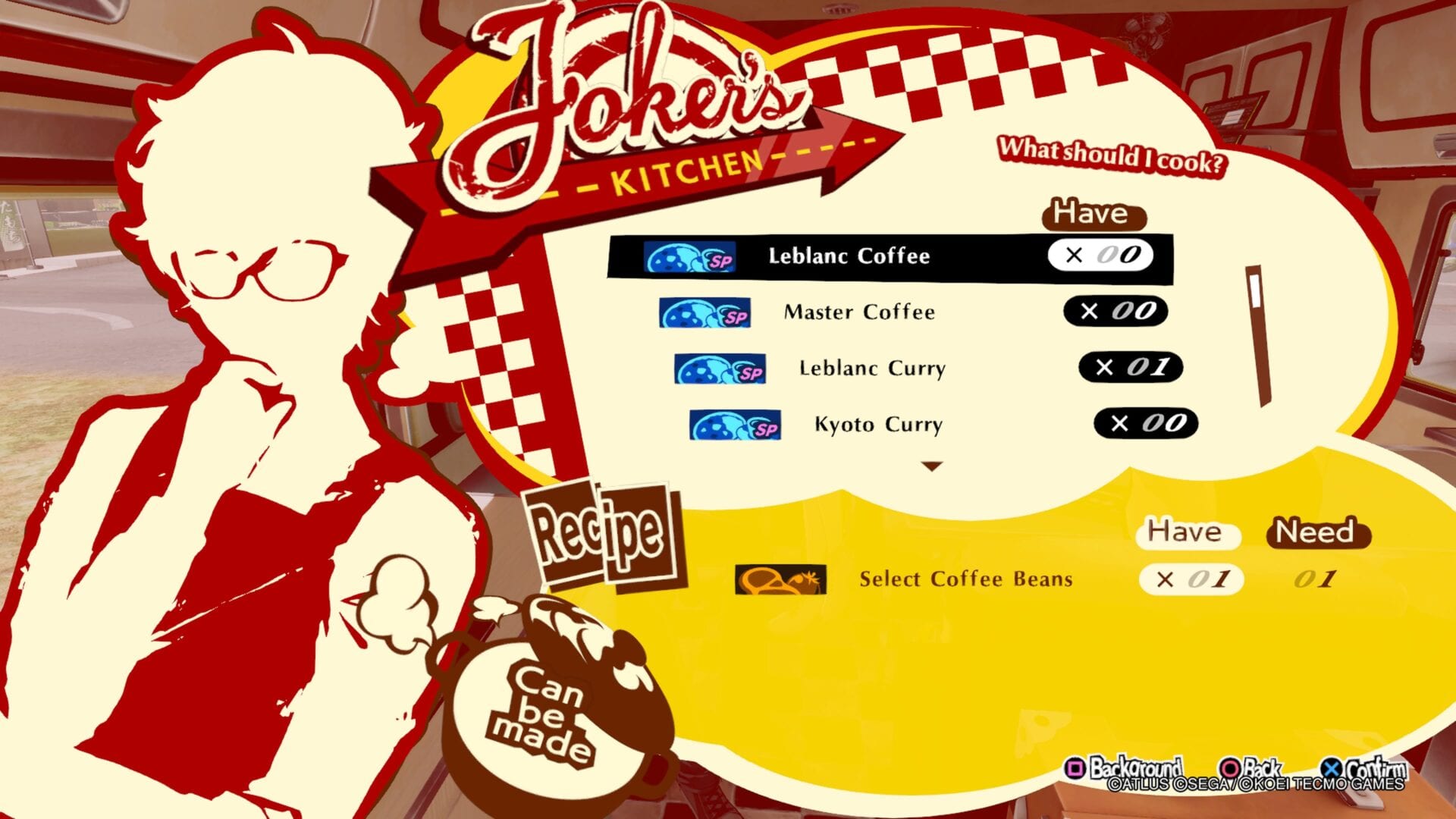 There’s more to Persona 5 Strikers‘ gameplay than tearing through enemies Musou style. Taking cues from the mainline Persona games, the title has side quests to complete, equipment to buy, and recipes to learn. Given how big the game is, though, you wouldn’t be blamed for being unclear on how to find all of the cooking recipe locations in Persona 5 Strikers, and needing some help to track them all down.

Fortunately, we’ve spent a decent amount of time with the game and tracked down each and every one of those pesky culinary records, and have laid out how to find all 19 of them in a detailed guide.

As stated above, there are a total of 19 cooking recipes to find in Persona 5 Strikers.

The majority are bought from shops scattered throughout the different cities you can visit during the main story. The rest, meanwhile, are earned for progressing the plot, speaking to specific characters on specific days or finishing Requests for different members of the Phantom Thieves.

To streamline the process, we’ve laid out how to get each recipe down below as they would become available in the game.

Where to Find Every Recipe in Shibuya

There are two recipes you can get in Shibuya in Persona 5 Strikers, and they’re unmissable due to being tied to the main story.

When you talk to Sojiro in order to set off on your road trip, he’ll give you the recipes for Leblanc Coffee and Leblanc Curry along with some ingredients for the curry. They’ll act as your tutorial recipes for how to cook the rest of the dishes you come across during your playthrough.

Where to Find Every Recipe in Sendai in Persona 5 Strikers

Next up are the recipes in Sendai. There are two you can track down, and both are for sale through the city’s shops.

The first is at the Outdoor Cafe found in the bottom left corner of the Mt. Aoba Park area. It’s for the Salmon Bowl dish, and costs 900 yen to purchase.

The second recipe is for the Gyutan Stew dish. It can be found for sale at the Gyutan Restaurant on the far right side of Sendai Station for 1,620 Yen.

Where to Find Every Sapporo Recipe

The next batch of recipes you can find in Persona 5 Strikers are in Sapporo. There are three in total to find: The first two are for sale from shops in the city, while the third is given to you by a member of the Phantom Thieves.

The second recipe is for the Miso Ramen dish. It’s sold for 850 yen at the Sapporo Ramen Alley, found in the middle right shop on the right side of the Suzushino area.

The third and final recipe in Sapporo is given to you by Ann. Speak to her on 8/11 when she’s standing next to Ryuji in front of the Seafood Bowl Shop. She’ll give you the recipe needed to make the Jingisukan free of charge.

Where to Find Every Kyoto Recipe in Persona 5 Strikers

Next up is the cooking recipe you can find in Persona 5 Strikers’ Kyoto section. This is one of the easiest ones to get, as it’s given to you automatically for progressing the story. Simply progress the game to the point where you go to Kyoto, and after a few cutscenes it’ll be given to you.

Where to Find Every Okinawa Recipe

After that, you’ll have three recipes you can track down in Okinawa.

The first is the Goat Soup recipe. It can be found at the Bento Shop second from the bottom right of the Ferry Dock area, and is sold for 1,300 yen.

Then, there’s the Okinawa Soba recipe. Sold for 800 yen, this one is found at the Drink Stand in the Beach section of the city, in the upper-right corner of the map under the area’s entrance.

Finally, there’s the Goya Chanpuru recipe. Futaba will give you this one free of charge on 8/18 when you talk to her after clearing the Okinawa Jail. She can be found in the Ferry Dock area, in the bottom right corner next to the Velvet Room gate.

Where to Find Every Osaka Recipe in Persona 5 Strikers

After that, you’ll have a whopping five recipes to find in Persona 5 Strikers’ next city, Osaka.

The first one you can grab is for Crab Hot Pot. It’s sold at the Crab Restaurant found on the lower right-hand side of the row of shops in the Dotonbori area. It costs 6,600 Yen to purchase.

From there, head all the way to the left side of the Dotonbori area. At the edge of the map, you’ll find a Japanese Restaurant selling a recipe for Osaka Sushi for 3,500 Yen.

The next Okonomiyaki recipe is sold for 1,100 Yen at the Okonomiyaki Restaurant found in the Shinsekai section of the city. Specifically, it’s the third shop from the bottom on the left side of the map.

The fourth recipe you can find is for Kushikatsu. This one is obtained by speaking to Yusuke on 8/24, while he’s standing in front of a skewer restaurant directly to the right of Shinsekai’s Velvet Room entrance. After you talk to him, Sophia will give you the recipe free of charge.

The fifth and final recipe you can get in the Osaka section of Persona 5 Strikers is for Obanzai. Getting it takes a bit of legwork though, so be prepared.

First, head to the Northwest corner of the Shinsekai area on 8/24 and look for Zenkichi in front of a Souvenir Shop. Speak to him, and then accept the “Cooking Papa” Request. You’ll then be tasked with enlisting Futaba and Haru in teaching Zenkichi how to cook.

From there, head to the Dotonbori section of the city; specifically, the far left side of the map. Make your way over to Haru, who will be to the west of the row of shops on the upper left.

Speak to Haru and she’ll agree to help so long as you can gather some ingredients for the lessons. She’ll then file a Request you can complete in order to progress the quest and earn the Obanzai recipe.

Specifically, you’ll need one Kamo-Nasu Eggplant, One Tofu, and One Beef. All three can be bought from the nearby shops, or Sophia’s online store if you already bought them at least once.

How to Get Every Late-Game Recipe

The last three recipes you can obtain in Persona 5 Strikers are all tied to the completion of late-game Requests.

The first is the Churrasco recipe. This one is obtained by accepting and completing the “Employee Course Correction” Request, which becomes available after you clear the Osaka Jail. It’ll require you to return to said Jail and defeat a set number of its stronger enemy variants.

The second is the Master Curry recipe. It’s a reward for completing the “A Thief’s Special Challenge” request. Only available after you’ve cleared the game and reloaded the cleared save file to access the post-game content, the side objective requires you to make your way from the start of the Tree of Knowledge Jail all the way to the final boss room without being detected by enemies once.

Finally, there’s the Master Coffee recipe. This is given to you as a reward from Morgana for completing the final Forgotten Desire request, titled “Trapped in the Great Tree.” More on the specifics of these types of missions and how to complete them can be found in our guide on every Forgotten Desire location.

As for what you get for finding every Recipe in Persona 5 Strikers, it’s fairly worthwhile.

In addition to nabbing the Master Chef Trophy after you’ve cooked 12 or more of the dishes, you’ll also get a hefty boost to your Bond experience when you make each item for the first time.

Not only that, but dishes you cook yourself have some of the best restorative effects in the game, from restoring a large amount of SP for the Entire party to applying buffs on top of healing party members in dire straights.

Hopefully this cleared up where to find every cooking recipe in Persona 5 Strikers. For more on the game, check out our wiki, or see more of our coverage below.