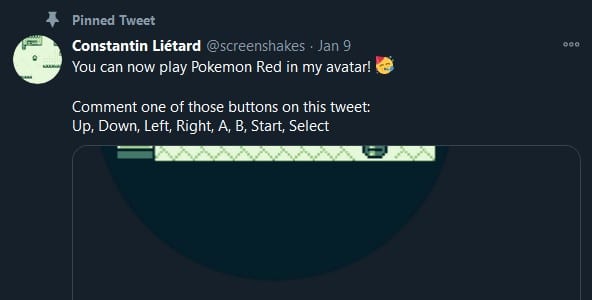 Remember when Twitch Plays Pokemon was a whole thing? Well, if you thought that was a mess, you’ll be glad to know that it’s now possible to play the entirety of Pokemon Red through someone’s Twitter profile picture.

This project was developed by Constantin Lietard and pushed out to Twitter over the weekend. How it works is that you can reply to the tweet embedded below with a button input command, and the game will automatically upload a screenshot to update the Twitter avatar to show progress.

It’s a little bit silly, especially since progress is so slow and can be hard to track with so many people trying to play, but it’s still an entertaining endeavor nonetheless. The program will pull a command from the replies every 15 seconds and apply it to the game.

In addition to that, there is also a new Discord server set up to help organize the efforts to try to beat Pokemon Red on Twitter, which you can check out here.