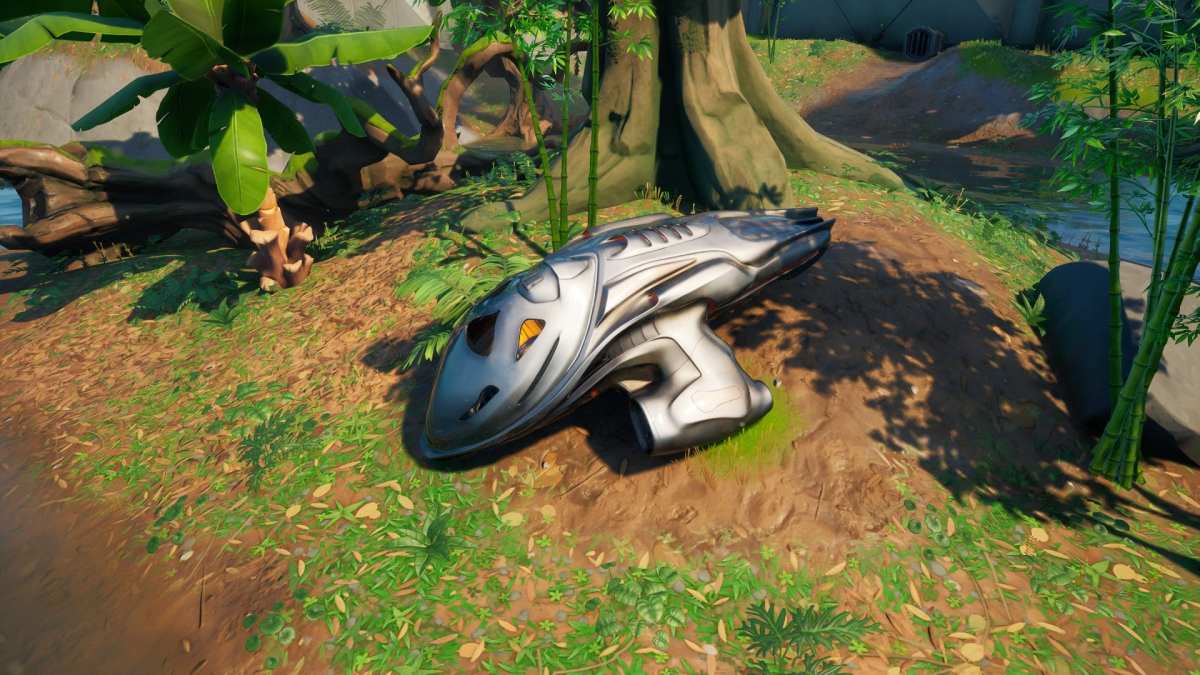 Today’s update revealed that the secret battle pass skin in Chapter 2 Season 5 is the Fortnite Predator skin. Players can unlock this scary alien skin by completing Fortnite’s Jungle Hunter questline. In this guide, we’ll run you through how to complete each of the quests currently available, and will continue to update the post as each new quest is added every week.

In order to get the Predator skin, you’ll need to make sure you have the paid version of this season’s Battle Pass. As long as you do, you should see the ‘Jungle Hunter’ quests appear on the ‘Mystery Rewards’ tab of the Battle Pass screen. We’ve guided you through how to complete each stage of the quest to help you unlock Predator in Fortnite.

The Mysterious Pod actually refers to Predator’s ship, which can be found in the north section of Stealthy Stronghold. We’ve marked its location on the map below, and you can see what the Mysterious Pod looks like in the image above.

Head to the location and once you’re in close proximity to the pod, this first stage of Fortnite’s Jungle Hunter quest will be completed. You’ll be awarded the Predator Icon for doing so.

The next stage requires you to speak to Beef Boss, Remedy and Dummy. Beef Boss can be found at the Durrr Burger Food Truck southeast of Stealthy Stronghold, marked in red on the map above.

Remedy can be found on the top floor of the house on the hill northwest of Pleasant Park, marked in yellow on the map above.

Finally, Dummy can be found directly north of Pleasant Park by a truck, and directly south of Beef Boss at the Durrr Burger Food Truck. We’ve marked Dummy’s map in blue on the map.

Completing this part of the Fortnite’s Predator skin questline will unlock the Plasma Caster Reticle emoticon.

Collect 3 Medkits – How to Unlock Predator in Fortnite

The third and final quest requires players to collect three medkits. These can be found as random loot from chests, or llamas, and also just laying around as floor loot across the map.

Pick up three Medkits across as many matches as you need and you’ll complete this third stage.

The fourth stage of the Jungle Hunter quest tasks players with finding Legendary (Gold) weapons or rarer. The only weapon type rarer than Legendary is Mythic, so players will need to either purchase these from the NPCs around the map with Gold Bars, collect them from eliminated players, or find them in chests. You only need to collect one to complete this challenge.

This is the one we’ve all been waiting for. Players will have to hunt down Predator and defeat it in order to unlock the skin. Predator can be found in Stealthy Stronghold, the same location we found its Mysterious Pod we needed to find for the first Jungle Hunter challenge.

Predator will be tricky to beat, as its got a Mythic Cloaking Device weapon that turns it invisible for 30 seconds at a time. It’ll use its pickaxe as a weapon in-game, dealing between 20-30 damage with each hit.

We’d advise hunting this creepy creature down as part of a squad in order to make this challenge even easier. You can check out the Predator skin you’ll unlock below.

Complete a Bounty as Predator

This one’s simple enough. Once you’ve unlocked the skin, go ahead and equip it and then complete any Bounty you’ve got outstanding. The week 8 challenges release tomorrow, Jan. 21, and plenty of these are nice and simple, so you shouldn’t have too many problems getting this one done.

For completing the challenge, you’ll earn the Hunter’s Trophy Back Bling, which is part of the Predator set, obviously.

Keep that Predator skin equipped and now head to Hunter’s Haven, marked on the map below.

You’ll find Predator’s Apartment in the northeast of Hunter’s Haven, up on the hill. Head inside with the skin equipped and you’ll immediately complete the challenge. You’ll know you’re in the right place by the Predator-themed items inside.

Completing this quest will unlock the Bio Helmet Online cosmetic.

Spend 30s Within 10m of a Player as Predator

For this one, keep the Predator skin equipped and simply jump out of the Battle Bus and try and follow a player to wherever they land. Keep yourself fairly well-hidden, and follow them around, doing your best not to make too much noise by breaking objects with your harvester.

Spend 30 seconds within 10 meters of them and you’ll complete the challenge. Your reward for this part of the Fortnite Jungle Hunter quest is the Vautja Wristblased harvesters.

Deal 100 Damage While Thermal Is Active as Predator

The final Fortnite Jungle Hunter quest can be completed by eating a Thermal Fish when wearing the Predator skin. We’d advise fishing one out of the water, and then keeping it in your inventory until you come across a player.

Consume the Thermal Fish just before you engage in battle, and then eliminate a player. A sniper can make this even easier, as a body or headshot will likely deal close to, if not over 100 damage in a single shot.

Completing this final stage of the Fortnite Predator challenges will unlock the Hunter’s Arsenal wrap, shown below.

And there you have a complete rundown of all of the Fortnite Jungle Hunter quests, so you can unlock the Predator skin and all of the cosmetics associated with this legendary hunter.

For more tips and tricks, head on over to our guide wiki, or check out more of our coverage on the game below.