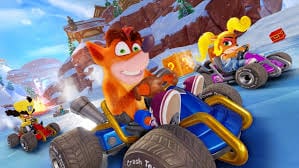 If you’re a subscriber to Nintendo Switch Online you can give the remastered version of Crash Team Racing: Nitro-Fueled for free this week.

Starting today and running until Jan. 5, you can pick up a trial version of the full game including both single and multiplayer modes.

We were big fans of CTR: Nitro-Fueled when it released last summer with our reviewer Chris Jecks saying:

Crash Team Racing Nitro-Fueled is the faithful remake of the now 20-year-old title that claimed so many hours of my childhood that many fans and I had hoped it would be.

CTR: Nitro-Fueled not only retains the game’s impressive single-player campaign (with updated visuals of course) but it also adds a brand new online multiplayer mode with brand new features including customization options.

Crash has been back in the spotlight this generation. Most recently Crash 4: It’s About Time released and has well-received by both critics and fans alike.