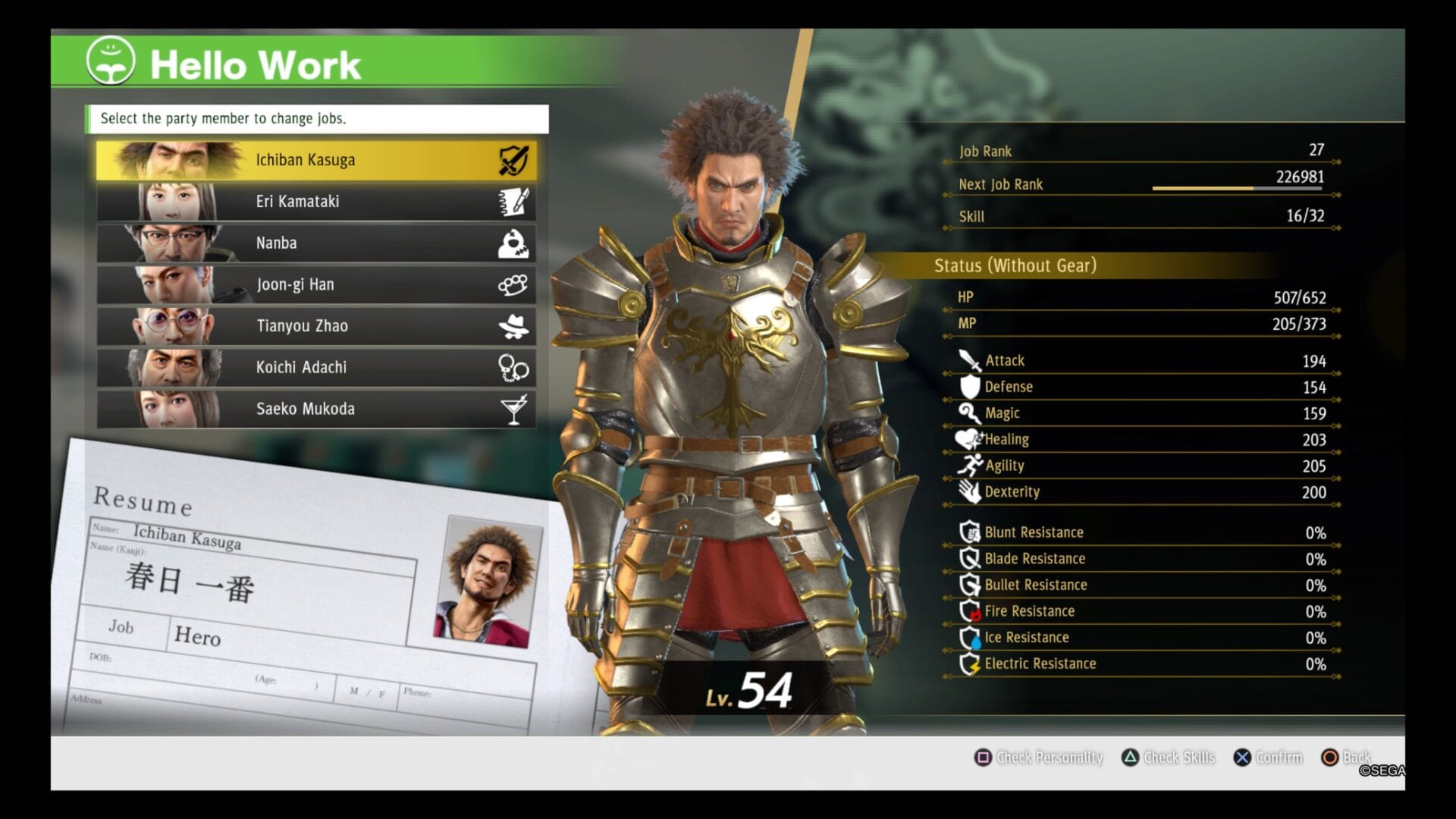 Yakuza Like a Dragon is flush with JRPG gameplay elements, not least of which being the ability to assign each of your party members jobs. each one offers its own strengths and weaknesses and can completely alter how you approach battles. As a result, figuring out which ones are the best can be a hassle, which is why we’ve done the leg work and created a guide on what the best Jobs are and how to unlock every Job in Yakuza Like a Dragon.

To start, unlocking every job in Yakuza Like a Dragon is fairly simple.

Depending on which character you wish to change jobs with, there will be certain requirements for unlocking a new job to change to. Kasuga, the main character, will need to be at a certain level and have reached a certain level in one of his six Personality stats. For example, to unlock the Musician job, he’ll need to be level 15 with a Kindness level of five.

Other members of the party, meanwhile, will need to be at a certain level and have reached a certain Bond level with Kasuga. Adachi, for instance, unlocks the Chef Job after reaching level 25 and reaching a Bond level of 4 with Kasuga.

Bond levels are obtained by building up their Bond meters with battles and interactions, and then viewing the character side stories available for each party member at the Survive bar, located on the far-left side of Yokohama. If your party members’ Bond levels are too low to unlock a certain class, head to Survive and see if you can talk to them to nab a level-up.

As such, the process is much the same as with Kasuga: Get each party member to level 25, and build up their Bond levels to level 5. Once you’ve done so, each of them will have unlocked all of their available Jobs.

Once you’ve unlocked a given Job, you can then change to it at Hello Work, the freelance agency located in the lower right corner of Yokohama’s map. Simply head inside and speak to the clerk, and you’ll be able to change jobs free of charge.

What the Best Jobs Are for Each Character

As for what the best jobs are for each character in Yakuza Like a Dragon, it’s largely tied to each character’s base stats and abilities.

Kasuga’s Hero class is arguably his best, taking advantage of his higher attack and well-rounded build overall with further stat boosts. Not only that, but it provides healing and buffing spells to help you keep your party alive and in the enemy’s face alongside you.

For Nanba, any caster class is the way to go due to his high Magic and Healing stats. His base Homeless Guy class is good if you want to use him for offensive magic, while the Host and Fortuneteller classes – unlocked at level 20, bond level 3 and level 20, bond level 4 respectively – can turn him into an ideal debuffer or supporter.

Adachi is best changed to the Enforcer class, unlocked at level 15, as soon as possible. Several of his skills revolve around tanking hits and drawing the enemy’s attention, and this class allows him to do just that without going down for the count.

Saeko’s ideal class, meanwhile, is the Idol class, unlocked at level 15. It takes full advantage of her high Healing stat, and allows you to craft an ideal support character for your go-to party.

Joon-gi Han, meanwhile, is in the same camp as Kasuga. His base Hitman class is his best by far, offering versatility in how he can deal with enemies and a high Agility stat to do so in a flash.

It’s the same story with Tianyou Zhao: His starting class, Gangster, is his best option, allowing him to maximize his damage-dealing potential with a number of blade-related skills.

Then, there’s Eri Kamataki, the game’s semi-secret party member. While her starting class is exceptional in terms of granting her high attack and enemy debuffing skills, she can also shine as a Night Queen, which offers much the same benefits.

If you haven’t managed to unlock her yet, you can read our guide on how to do so.

Hopefully this cleared up what the best Jobs in Yakuza Like a Dragon are and how to unlock every job. For more on the game, check out some of our other guides covering topics like how to get the Saejima summon and how to get the Ono Michio summon.

Related Posts
Comments
Continue Reading
Related Topics:best, Guides, How to, jobs, MultiPost, unlock, what are, Yakuza Like a Dragon