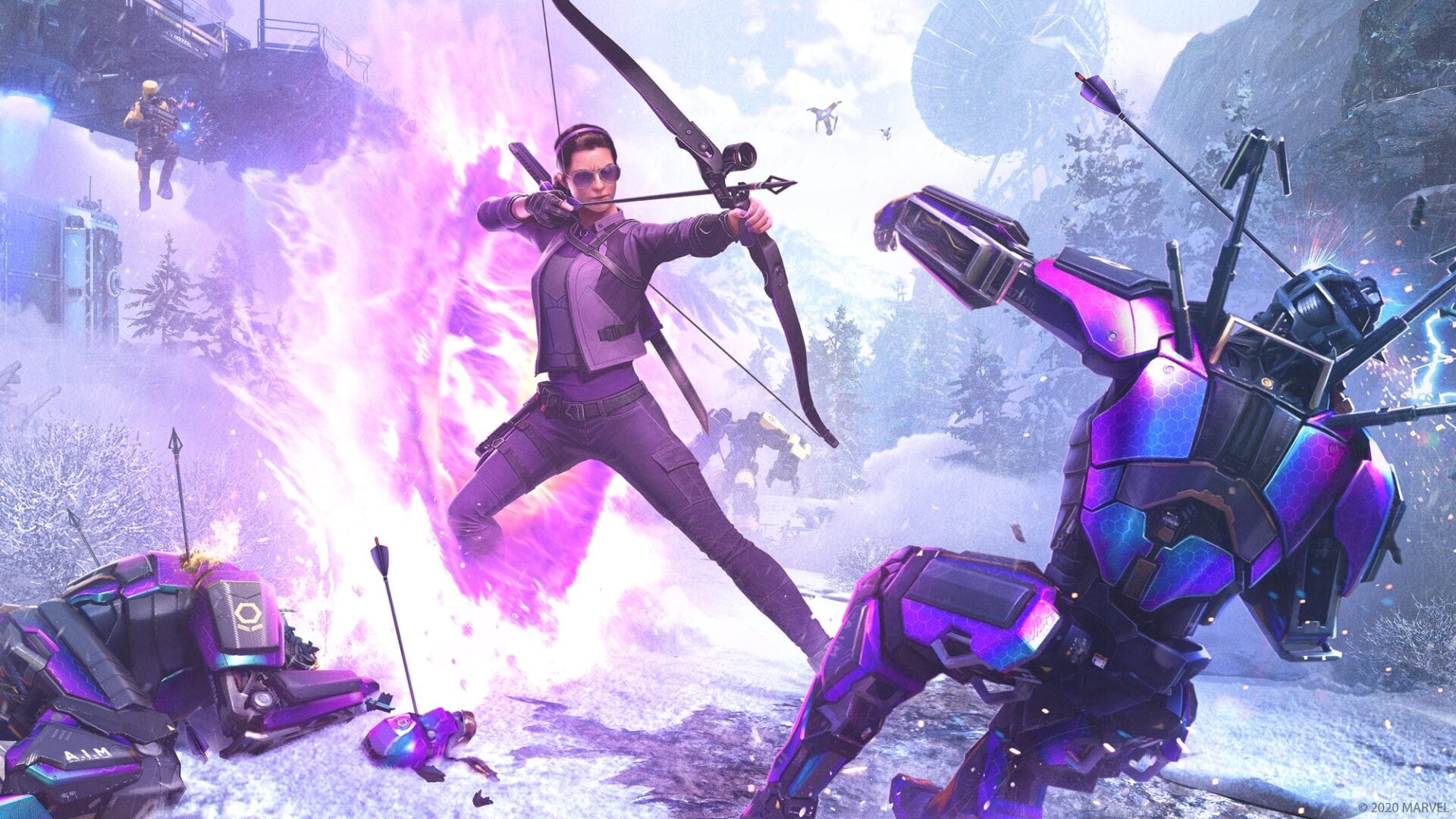 First of all, those who already purchased the game will get a set of goodies as means of appreciation on October 22 at 10:00 am PDT. It will be available until November 5.

Here’s a list of what you can expect to receive:

Next, we get a deep look at what we can expect in terms of development and updates from Crystal Dynamics head of studio Scot Amos.

This includes the delay of the PS5 and Xbox Series X/S release for the game into 2021.

We can’t say this enough – thank you for your feedback. We’ve already started implementing feedback-driven features in the game. Examples in yesterday’s Patch V1.3.3 include an increase to the radius of which rewards are automatically drawn to the player and the ability to preview cosmetics from vendors prior to purchase. Paired with the release of Marvel’s Avengers: SHIELD Substation Zero, we’ve also added terminals in outposts to make accepting faction missions & assignments much quicker.

We’re actively working on new community-driven features for the coming months, including but not limited to:

Avengers Initiative Ping System: A system that will allow players to mark objectives, resources, health crates, and enemies, allowing players to command AI companions to hack/smash doors or prioritize specific enemies.
Reassemble Campaign Replay: An option to reset the Reassemble campaign and replay it with your Super Hero’s level and gear intact.
High Contrast Mode: An accessibility feature that will allow the player to apply solid darken veils behind text to improve readability.
Hero Icon Visibility: An option to adjust the display of identifying icons above a Super Hero’s head to be on by default or dynamic.
Mission Reward Clarity: Improved clarity around mission-specific rewards when viewed on the WAR TABLE. This will allow players to more strategically take on missions to meet their current goals and seek out specific gear and resources.
Offscreen & Ranged Enemy Attack Indicators: Better feedback for players to avoid offscreen and ranged enemy attacks.

Right now, we are focusing on improving four key areas of the game and we would like to share some progress updates with you.

Performance & Stability
In the past several weeks we’ve uncovered and corrected several systemic issues that were creating a number of game crashes or freezes. Through our metrics tracking we’ve seen a significant decrease in these crashes week-over-week.

However, on some PCs we are continuing to see a higher number of crashes than we’d like, especially those that are the result of GPU hangs and GPU driver crashes. We have a dedicated team tracking these as highest priority fixes across all platforms; including bringing in external partners to help isolate any remaining issues to maximize our stability.

We are actively working with NVIDIA on specific issues that some users have reported with performance degrading over time. With the latest Patch V1.3.3, we’ve added NVIDIA DLSS, which significantly improves framerate while maintaining high quality visuals for NVIDIA RTX hardware. We’ve also added DLSS support for ultra performance mode and Dynamic Resolution scaling. More information about NVIDIA DLSS can be found here.

We’ve made some meaningful improvements to the multiplayer and matchmaking systems since launch, including expanding power-level matching speed so a broader range of diverse players can connect faster.

Moving forward, our philosophy for multiplayer improvements is to rework the way we group players. The goal is to draw from a larger pool of online players and provide faster ways to jump into desired content. This will help with quicker matchmaking so you can get to the fun faster. We are also exploring ways to better make use of the quick match feature with greater rewards for joining in to help others out. Stay tuned!

We know how important meaningful rewards are to our fans. Our philosophy is that rewards should always feel worth the time you’ve invested to earn them. The upcoming AIM Cloning Lab will guarantee an exotic drop for the first completion per week, and a notable chance of exotic drops for subsequent runs. You should also feel that exotic drops are more unique to late-game play; Tachyon and future AIM Cloning Labs missions draw from special reward pools. When you do get exotics from these late-game activities, they will also feel more significant with reworked attributes and perks.

Reward tuning will be an ongoing pursuit to ensure we hit the sweet spot with players, and we commit to transparency through patch notes when changes are made.

Launch was only the beginning for Marvel’s Avengers. We have both refinements to existing content and sweeping additions coming that will introduce new mission types, characters, regions, and even higher global stakes.

Mega Hive: To support our late game players, we recently dropped the Mega Hive. Mega Hives are a weekly mission type for fans who prefer to fly solo, testing their top-tier roster in a gauntlet of descending floors with increasingly difficult enemies. We’ve heard loud and clear that players want a multiplayer option for the Mega Hive, and that is something we are working towards in the coming months.
Tachyon Missions & SHIELD Substation Zero: A new outpost, SHIELD Substation Zero, dropped this week in the Pacific Northwest. SHIELD is investigating new temporal anomalies that have begun forming across the world and need the Avengers’ help. Visit this space to meet new characters and activate new rituals.

You’ll investigate the Tachyon anomalies by taking on the new Tachyon Rift missions. These rifts make gameplay much more challenging by introducing Tachyon Storms, which require greater collaboration between players (two minimum) to succeed. The storm will damage players over time, but charges Heroic energy at an increased rate. It also introduces Cosmic Gear. This is another late-game offering, as Tachyon Rift Missions require 140 Power Level or higher Super Heroes to play. These missions are available once per day and rotate out daily.
Omega-Level Threats: In the next few weeks we will introduce a new mission classification to Marvel’s Avengers – Omega-Level Threats. Missions under the Omega-Level Threat umbrella are multiplayer-focused challenges that are tuned for high-end players and offer special late-game rewards. Skill and coordination with your team will be key to overcoming these missions, including the Avengers-worthy fight at the finale.
Omega-Level Threats are a first step towards even more exciting and challenging late-game content. Many in our community have asked if Omega-Level Threat missions are Marvel’s Avengers’ equivalent to raids. Though focused on multiplayer and designed to be extremely challenging, Omega-Level Threats represent our first step in escalating the challenge your Super Heroes face. As the Avengers Initiative narrative continues to unfold, the stakes will get higher and the challenges harder.

The first Omega-Level Threat is the AIM Cloning Lab, which requires advanced tactics and the full cooperation of a seasoned four-player team to beat the high power level challenge. The lab culminates in a massive fight that is influenced by how you performed in the penultimate objective. How? We’re not going to spoil the surprise for you! The AIM Cloning Lab must be completed between 10:00 AM PDT Friday and 10:00 AM PDT Monday. While it can be replayed, like other late-game content it has better rewards for the first completion.

Moving forward, we intend to have a fixed, predictable patching cycle to ensure all new content meets both our and your high standards and has time for extensive internal testing. We know fans are hungry for new content, but delivering a fun experience is our priority. With this in mind, we’ve decided to push Kate Bishop’s Operation launch back a bit, out of October. We’re sorry for this slight delay, but we are dedicated as a team to quality first.

Kate’s new Operation will be a must-play for fans wanting to know what’s next in the story! In Marvel’s Avengers: Kate Bishop — Taking AIM, Tachyon Rifts become a harbinger of a new threat. As players investigate the source of them, they will pick up on a story that begins shortly after the conclusion of the Reassemble campaign. Then comes Clint (we’ll have more information on him later) and looking into 2021, our biggest Avengers Initiative addition yet will introduce a new Hero, region, and narrative arc.

We’ve also made the decision to shift our PlayStation 5 and Xbox Series X|S launch to next year to ensure that we give our team the time to deliver a next-gen experience showcasing all that this game is meant to be. More details to come.

Until then, however, you’ll be able to continue playing the current-gen (PS4/Xbox One) Marvel’s Avengers game on next-gen platforms to take advantage of their powerful hardware, be it via inserting a physical disk or redownloading the game. Two of the most obvious benefits of this are improved frame rates and faster loading times. In addition, players who make the jump to the PlayStation 5 or Xbox Series X|S will still be able to play co-op with their friends on the PlayStation 4 and Xbox One respectively as well as carry their existing save-game forward to the next-generation of consoles!

All the above will be available to players at no additional cost, including the next-generation upgrades for the PlayStation 5 and Xbox Series X|S.

As mega-Marvel fans ourselves, we can’t wait to reveal more about the iconic Super Heroes, Super Villains, and settings on the roster these coming months, starting with our next Marvel’s Avengers WAR TABLE in November.

We are so excited to share the future of Marvel’s Avengers with you.”

Marvel’s Avengers is currently available for PS4, Xbox One, and PC. If you want to learn more about it, you can read our review.