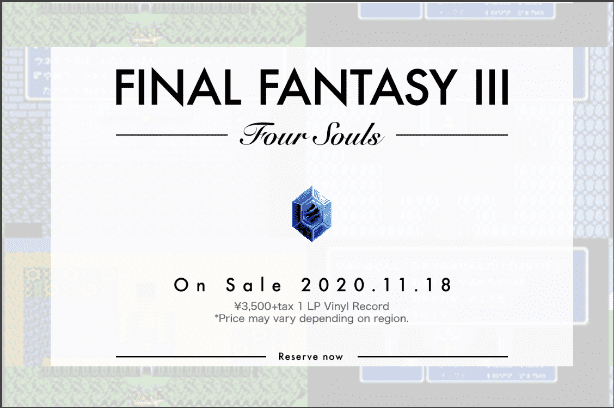 This year marks the 30th anniversary of Final Fantasy III. While it might not be quite as well-known as the titles that came after it, it’s still one of the pioneer RPGs from Square Enix that helped to put the series on the map. To celebrate its 30th anniversary, Square Enix is releasing a special vinyl on the store.

Titled Four Souls, the vinyl release will contain both arranged and the original versions of the following tracks:

It’s worth noting that these are still just marked as tentative tracks over at the Square Enix website, and it’s possible that the track list may change over time. But for now, that’s a pretty good selection that represents FFIII well. Eternal Wind, in particular, should be recognizable to most fans of the series, especially FFXIV players, considering the significance of the Crystal Tower itself in that game’s latest expansion, Shadowbringers.

Four Souls is set to be released on Nov. 18. You can pre-order it via the Square Enix store, Sony Japan, or Amazon Japan.