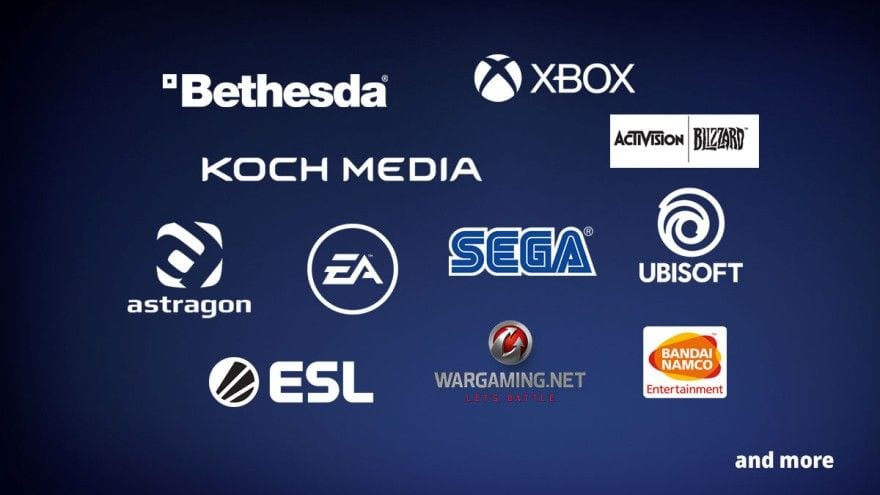 Today the organizers of Gamescom sent a press release to announce the theme of the event (which this year will be exclusively online) and a list of participating publishers.

First of all, we get to take a look at the companies that partnered with Gamescom to bring content to the event.

Those include big names like Xbox, Sega, Bethesda, Electronic Arts, Ubisoft, Bandai Namco, and many more.

We also hear about the theme of the show, which will be “Playing into the future.”

“The guiding theme of gamescom 2020 has also been defined: with “Playing into the future”, gamescom focuses on the many positive effects of games and the games industry on society: computer and video games have helped millions of people during the corona crisis, for example, by also helping to maintain contact with friends and family during the lockdown.

Classic sports events took place during the corona pandemic as e-sports tournaments, while it was possible to visit concerts and entire festivals within games, and numerous charity activities took place within the community. It was even possible to participate in research on the corona virus thanks to the experimental game “Foldit”.

This means that games and their communities were already pointing a finger in the direction of gamescom, because, although the world’s largest games event of the year could not take place on location in Cologne, it will still bring millions of gamers together in 2020 to follow the biggest new products and news and to celebrate games culture.”

“Thanks to the innovative and bold games industry and games community, we can together organize one of the biggest events in the world with gamescom 2020, even in these times, and thus embark on new paths. This is once again evident: there was already a lot of support from companies shortly after communication of our digital concept for gamescom 2020, as is made impressively clear by the long list of first partners. Many more partners will follow. Millions of fans can now look forward all the more to an eventful gamescom 2020.”

“In the difficult times of the corona pandemic, games have helped millions of people worldwide and provided fun and pleasure. They have helped friends and families to stay in touch, even when we could not leave the house. The games industry and community has always been characterized by this positive and future-oriented attitude. gamescom will thus once again provide a forecast in 2020 of what will be in the living rooms of millions of gamers tomorrow, on the screens the day after tomorrow, and will enrich all of our lives in future.”

The event will also involve two main trends, the new console generation and games at school.

The successors to the current generation of consoles have been announced for the end of the year with the PlayStation 5 from Sony and the Xbox Series X from Microsoft. Millions of fans worldwide are already waiting with longing for the new devices. The new console generation is thus the top trend of this year’s gamescom. Finally, there will be many announcements and much news revolving around the consoles in the context of gamescom at the end of August, only a few weeks prior to its start. The new models offer especially high performance, thus enabling gaming worlds of a magnitude and wealth of detail that have been impossible to realize up to now. The new devices master, among other things, so-called ray tracing, with which a novel calculation of light enables especially realistic graphics. Where one needed an entire computer centre for this a few years ago, this will soon be found in the new consoles in the living room.

Corresponding with the start of the school year in many federal states at the end of August, the second gamescom trend this year is “Games at school”. There has already long been a large and varied offering of serious games, with which one can learn playfully. More and more parents and children trust in such games. Due to the corona-related closures of schools, the need for them has increased dramatically. However, the corresponding serious games have to date primarily been used at home and in the private realm. Serious games have many positive qualities that also provide help with teaching and learning in school: they are fun, motivate, and thus improve learning success. Unfortunately, many schools in Germany are still too poorly equipped to consistently include serious games in the school routine. Which is why the focus of the gamescom congress is also on digital education this year. There, among other things, best practice examples will be shown and the exchange between educators promoted.”