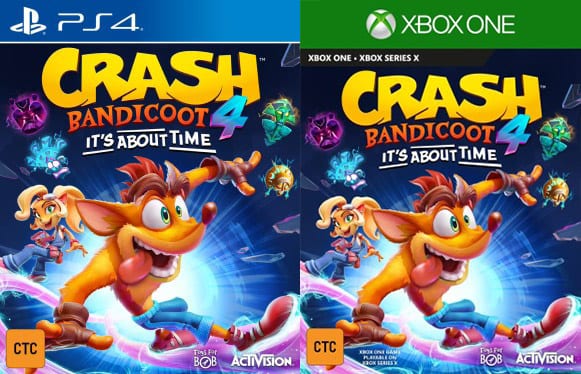 Following the success of the N’Sane Trilogy Remake, it appears Crash Bandicoot is getting an all-new adventure for PS4 and Xbox One. Spotted by Gematsu earlier today, The Taiwan Digital Game Rating Committee has rated the unannounced Crash Bandicoot 4: It’s About Time.

The game is being developed by Toys for Bob, the studio behind the esteemed Spyro Reignited Trilogy.

The listing included the following synopsis:

“Crash is relaxing and exploring his island in his time, 1998, when he finds a mysterious mask hidden away in a cave, Lani-Loli. The mask is one of the Quantum Masks and apparently knows Aku-Aku, Crash’s mask friend! With the Quantum Masks returning and a Quantum Rift appearing near our heroes, they decide to bravely head through to different times and dimensions to stop whoever is responsible.”

While the discovery itself was unexpected, news of a new Crash game has actually been hinted at already –ironically, again, via a leak— when merchandise featuring a redesigned Crash character was discovered.

You may have noticed we didn’t include Nintendo Switch or PC in the listed platforms above, and that’s because there’s no mention of them; despite the N’Sane Trilogy featuring on all platforms, it seems Crash 4 won’t.

What we can say for certain is that the game will play on Xbox Series X. If you look at the bottom left corner of the cover image you’ll see it clearly indicated. Presumably, that means it’s also heading to PS5.