Today  Nintendo announced its quarterly financial results and provided an update to the number of Switch and 3DS shipped worldwide since the consoles’ release.

The numbers you’ll see below are updated as of March 31, when the latest fiscal quarter (which began on January 1) ended.

In the infographic below you can see exactly how many Nintendo Switch units have been shipped to retailers, alongside shipped units for software, and the same goes for Nintendo’s older portable, the 3DS.

This means that the Switch has shipped 3.29 million units in the quarter between January and March.

We also get the outlook for the current fiscal year, which will end on March 31, 2021. Nintendo predicts selling 19 million Switch units in the twelve-months period, which would bring the total to 74.77 units if that goal was achieved. 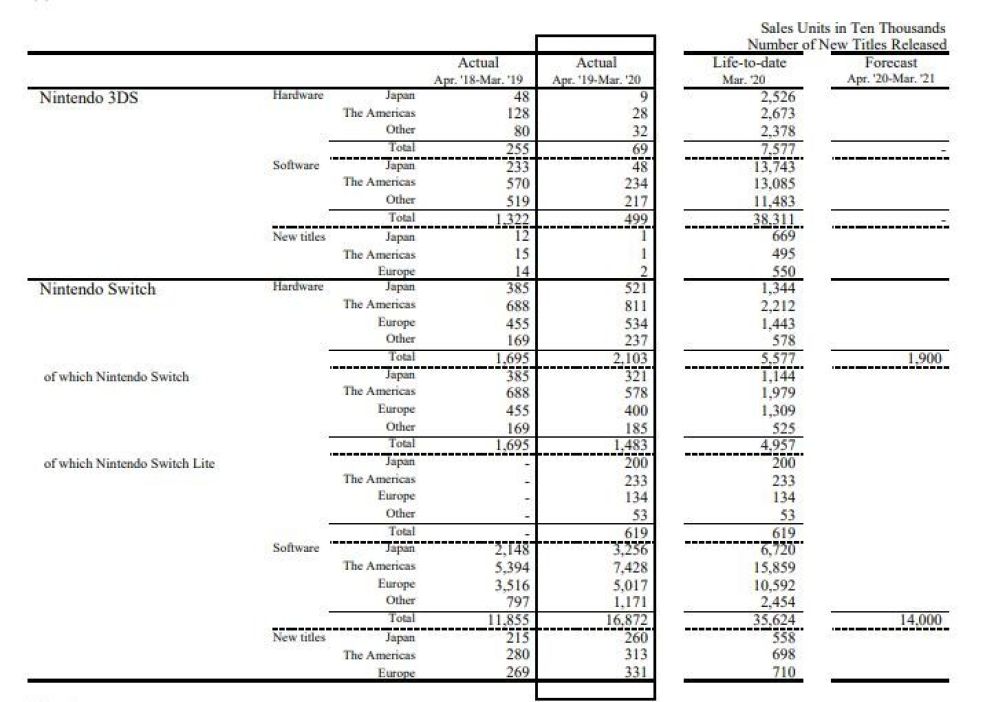 Moving on to the performance of the company, the table below shows that all profit figures for the full fiscal year ended on March 31 are in the black, with significant increases year-on-year.

We then get a detailed explanation of the performance of the house of Mario and Zelda.

We learn that Pokémon Sword and Shield shipped 17.37 million units by March 31, while Animal Crossing: New Horizons shipped 11.77 million units, making it the best debut ever for a Switch game.

Looking at software, Pokémon Sword and Pokémon Shield became big hits, posting sales of 17.37 million units, and Animal Crossing: New Horizons, released in March, sold 11.77 million units, which is now the best start ever for a Nintendo Switch title. In addition to titles like Luigi’s Mansion 3 and Super Mario Maker 2 that were released during this fiscal year, sales also continued to grow steadily for popular titles released in previous fiscal years and for titles from other software publishers.

The total number of million-seller titles during this fiscal year reached 27 titles, including those from other software publishers. Nintendo Switch also launched in China through Tencent Holdings Limited in December.

Because of COVID-19, production and shipments of the Nintendo Switch console, accessories like the Joy-Con controllers, and Ring Fit Adventure faced delays in some regions from February through March, but this only had limited impact on business results for this fiscal year.

Turning to our digital business for dedicated video game platforms, in addition to the strong sales of downloadable versions of packaged software for Nintendo Switch, the steady growth in sales of download-only software and add-on content, and the contribution from Nintendo Switch Online throughout the year all helped to bring overall digital sales to 204.1 billion yen (71.8% increase on a year-on-year basis).

For the mobile business, many consumers continue to enjoy applications released during this fiscal year, such as Mario Kart Tour, as well as titles that were released in previous fiscal years. Our mobile, IP related income reached 51.2 billion yen (11.5% increase on a year-on-year basis).
In total, net sales reached 1,308.5 billion yen (including overseas sales of 1,007.3 billion yen, or 77.0% of the total sales).

Lastly, the company posted an overview of the potential impact of the COVID-19 pandemic on its business.

“The spread of COVID-19 poses the following risks that may impact the Nintendo group. However, this list does not encompass all risks, and there may be other risks that cannot be predicted.

It appears that delays in production and shipping are gradually recovering. However, we may be affected if there continue to be issues involving the procurement of necessary components. In addition, if the impact of COVID-19 is prolonged or worsens further, it may disrupt the product supply.

There are restrictions on sales channels in each country due to measures to prevent the spread of the virus including restrictions on movement outside the home and closure of retail stores, and this effect may be prolonged. Also, if physical distribution is suspended, we will not be able to sell hardware or packaged software through e-commerce (electronic sales transactions).

In addition, there is a possibility that provision of those services offered via our network may be suspended in the event that we are no longer able to maintain the stability of our network systems.

Impact on research and development

If the effects of COVID-19 are prolonged or worsen further, development schedules may be impacted due to the difference in development environments between working from home and in the office. In particular, the impact to overseas subsidiaries and other affiliated companies involved in development is anticipated to be even more difficult to predict than within Japan.

As a result of these factors, we may not be able to proceed with the release of Nintendo products and the start of services as planned.
This is also true for other software publishers, so it may not be possible to provide game content on Nintendo platforms as planned.

Changing circumstances in different countries due to the effects of COVID-19 may cause exchange rate fluctuations that could impact our financial results.”

If you want to compare, you can check out the previous update that was released in January and was related to the fiscal quarter ended on December 31, 2019.