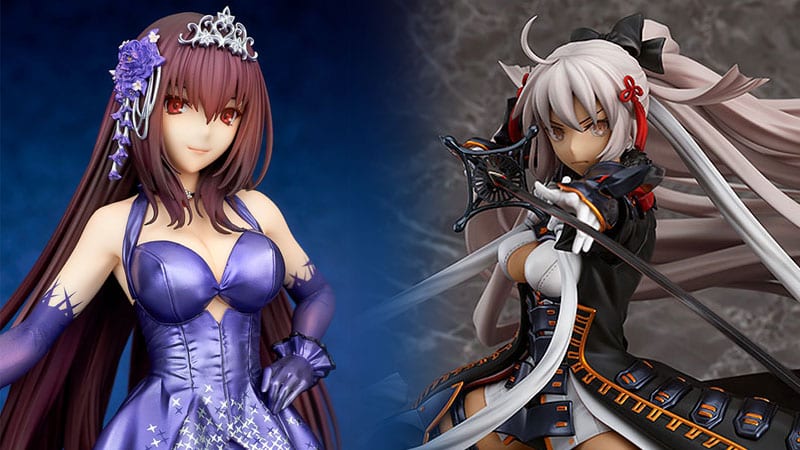 Fate/ Grand Order is one of the most popular mobile games on the market, and figures manufacturers keep announcing new portrayals of its characters.

This time around we get Scathach in her Heroic Spirit Formal Dress version by QuesQ and Souji Okita Alter with her stage 3 armor by Good Smile Company.

Both are now available for pre-order at Japanese retailers like Ami Ami, where they’re priced respectively at 16,830 yen (approximately translating into $158) and 20,580 yen ($193).

She’s approximately 25 cm tall, and she’s sculpted by Mederukin with the prototype painted by Ayumu Itsukaichi.

“From the smartphone RPG “Fate/Grand Order” comes an figure of the Shadow Country’s Queen “Scathach” in a gorgeous dress seen for the Heroic Spirit Formal Dress ascension!

For this truly impressive figure she stands beautiful and tall while the ornamentation is dazzling enough to mistaken for a star.”

Souji Okita is even further away, coming in October 2021. Sculpted by Beehive and Akinori Urakawa, she’s also in 1/7 scale, 235 mm tall.

Immeasurable, Unhindered, Unbound. The three beams weave together into Eternity-

She is equipped with her pitch-black blade Purgatory and has been captured in the very moment she is preparing to unleash her Noble Phantasm “Absolute Blade: Endless Three Stage”.

Her decisive, dignified expression, flowing pale pink hair and all of her armor and equipment have been recreated and carefully painted to preserve the appearance of differing textures in each area. Be sure to add her to your collection!”

Below you can catch pictures for both figures and a video poviding a better look at Souji Okita.