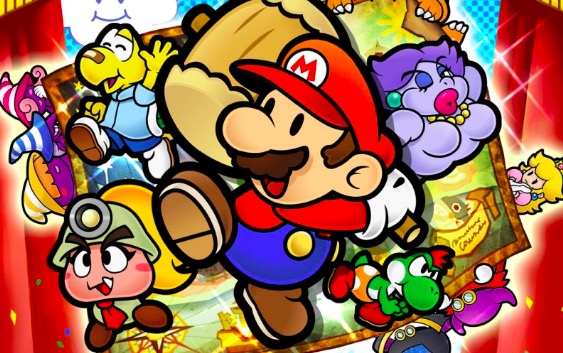 At long last, the latest chapter in the Paper Mario series has been announced, wherein our hirsute hero faces off against the dreaded Origami King this July.

Though the series has had its ups and downs, it remains beloved in the hearts and minds of Nintendo fans since it first came crashing onto our Nintendo 64’s nearly twenty years ago (feel old yet?)

One constant strength has been the boundaries pushed with its many boss fights, so we thought we’d take a look at ten that particularly stuck out in our mind.

Why is it though, every time I fight my boss, I just end up fired?

Warning: Paper Mario series spoilers ahead. And maybe the secret to eternal life, too? Only one way to find out.

We start off with the black sheep of the family; Sticker Star on the 3DS. Though its mechanics tried to veer too hard with the eponymous sticker mechanic, it was no less lacking in that trademark Paper Mario charm.

Of the bosses, Gooper Blooper is the standout for most people, or standSHLOOP, if you prefer. It forewarns you of battle long before surfacing, whacking you with its tentacles as you progress through Whitecap Beach. The cheeky minx!

Beyond being a visually spectacular foe, the Gooper Blooper battle is noteworthy for its fantastic musical track, which influences the tide of battle. This particular Blooper likes to boogie, and its style of attack corresponds with the backing flamenco rhythm.

As such, we are now naming him Santiago Vazquez Colón. Pretty sure that makes it official.

It’s tough to decide which Paper Mario title is the funniest of all, but the Wii’s Super Paper Mario is definitely a strong contender.

Your first encounter with the villainous Mr. L — whose true identity is about as mysterious as Hulk Hogan’s unfortunate stint as Mr. America — ends in short order, because as usual, Intelligent Systems gives the green guy absolutely no love.

He then ups the ante by summoning his mechanical “brother”, a garish flying device known as the Brobot.

The pun itself is worthy of a top 10 spot, yet the unique style in which this fight takes place is what really seals the deal. Mario takes to the stars atop the tiny alien Squirps, dodging missiles and pelting Mr. L and the Brobot with projectiles of his own.

It evokes memories of the Tatanga dogfight of yesteryear, just much better because you’re fighting an enemy called the friggin’ Brobot, dude.

To be quite honest, this whole list could just as easily consist of bosses from the Thousand-Year Door; it’s just that darn good.

Rawk Hawk is likely the most iconic character from the series’ second entry, a blowhard meathead and the reigning champion of the Glitz Pit. His flipping assaults are just as flashy as his persona, but he actually turns out to be a lot more of a pushover than you might expect at first. All talk, no Rawk!

Once the fight starts turning in your favor, the churlish champ will take to the rafters in an attempt to bring the whole house crashing down. From up there, he’s unjumponable (which is totally an adjective, despite what spell check claims), however, flinging a hammer at his smug face still works just as well.

Though he may be the ultimate embodiment of style over substance, when you’ve got this much style, you still deserve to be remembered. RAAAAAAAAAAAAWK!

If you’re a longtime Nintendo fan, you may remember the agonizing absence of the Koopalings that stretched on for almost a decade, shoved to the wayside in favor of the vastly inferior Bowser Jr.

Nowadays, they’re popping up all over the place, even as playable characters in franchises like Mario Kart and Smash Bros, a true testament to how far we’ve come… I don’t know why, but I think about this a lot.

That’s why it was so fantastic to see them once again, acting as the bosses of Color Splash on the Wii U. The first encounter against Morton Jr. is the most charming by far, but Roy probably takes the cake for compelling encounters.

He wields a cannon that fires off various paints, each color affecting Mario’s mood and subsequently, the tone of the battle. Red makes him angry, orange paint makes him bashful, blue paint makes him listen to lots of Eiffel 65, and so on, so forth.

Roy eventually blends all of his artillery together to create sinister black paint that obscures most of the screen, only to be foiled by the most terrifying weapon in the paper world: a washing machine.

Incidentally, if you want to read into the running gag, the green paint results in Mario feeling discouraged. Ergo, green sucks, and so does Luigi. Harsh!

This cloudy fiend may not strike the most imposing of figures, but don’t let your guard down, because he uses tyranny and cannibalism to great effect.

His lightning attacks are nothing to be trifled with, and striking him causes minions known as Tuff Puffs to sprout out. They’ll swarm Mario to deal damage, and worse still, Huff N. Puff can devour them to replenish his health.

Macabre as it may be, it’s hard to blame him, because those things look really delicious — like evil little pieces of popcorn chicken.

They’re also super polite, asking their cumulus overlord for permission to pummel. Chivalrous foes are the best kind, it has to be said.

Doing a bit of a 180 from the trend here, the final nemesis of the Thousand-Year Door doesn’t make this list for being cute or funny.

She’s a massive tonal shift from the Mario franchise as a whole; completely foreboding and badass. She’s not here for your gags or your games. She’s here to plunge the entire world into eternal darkness, and you’re the last line of defense.

When Sir Grodus, the presumptive major antagonist, sacrifices Princess Peach’s body to summon the Shadow Queen from her slumber, he believes that she will act as his willing servant. She quickly makes him regret that decision, yeeting him into oblivion before turning her sights on Mario and his crew.

As she is the ultimate embodiment of evil, it’s the rallying cries of the allies you’ve met along the way that prove to be her ultimate undoing. Between this Giygas impersonation and Brobot’s Tatanga tendencies, we’re left with an embarrassment of boss battle throwbacks in this series, aren’t we?

The Koopa Bros battle is significant in so many ways, not the least of which because it set the standard for the kind of wackiness the Paper Mario brand would become famous for.

The first major boss battle in the N64 original, the Koopa Bros initially come after you concealed in their elaborate Bowser disguise. It’s not much of a threat, and the real challenge comes after you’ve busted up their costume.

Their super spinning attack does significant damage, and they seem to have victory in the bag… until you send them toppling over, exposing the fact that at the end of the day, they’re still just Koopa Troopas.

Perhaps in some alternate reality, they’re capable of actually standing up against Mario, the Axem Rangers, or any other opponent thrown their way. For now, they’re just lovably lame.

The unique razzle-dazzle of the Glitz Pit was a hard act to follow, but as far as individual battles go, this duplicitous dastard has got the rest of them beat.

Your first scrape against this enigmatic ghoul goes by without incident, as he seems completely overwhelmed by Mario’s might. In desperation, he replicates the portly plumber’s silhouette, and yet, still isn’t capable of launching much of an offensive.

Once he’s bested, the heroes take their leave, only for you to discover that the freak-in-a-sheet pulled a switcheroo, taking your likeness and comrades and leaving you with nothing but a tragic shadow.

It’s identity theft of the worst kind! Your rematch pits you against all of your previous partners, who have mistaken Doopliss for the real deal. You’d surely be a goner had it not been for the newly acquired services of Vivian, one of the Shadow Sirens and Mario’s only true love interest. Ship it. Ship it, dammit!!

Technically, Mimi gets a significant advantage by virtue of the fact that you face her multiple times throughout Super Paper Mario. Even if that was not the case, Mimi would still go down as one of the series’ best boss battles, because her transformation is the most jarring thing in the series’ history.

At first, she appears to be a minor pest, throwing obstacles in your way (she SPITS on your coins!!), however with each hurdle you pass, she becomes increasingly vexed until it’s time to reveal her true form.

She proceeds to forcibly snap her neck, spin her head around freely and sprout long legs from her neck like a nightmarish spider. It’s horrifying in written form, and visually? …It’s just as creepy, to be honest.

Out of the three times you face Mimi, the last time is likely the highlight, combining her tactics from the previous two confrontations. Plus, she goes one-on-one against Peach, specifically because she talks smack to her beforehand.

This girl’s got sass, versatility, flexibility, and all the appendages you could ever need, what’s not to love about her?

A controversial number 1 to be sure, considering that some beloved battles are completely absent from this list (such as General Guy, Francis or the Crystal King), but in much the same way that the Koopa Bros personified everything about Paper Mario’s charm, Hooktail did so for the sequel, ramped up significantly.

This gargantuan dragon’s secret power is that of deception. When it looks as though she might be in danger, she attempts to negotiate terms of peace, with her final offer being for you to smell the bottoms of her feet.

I beseech you to find a better selectable decision in gaming history than “maybe just a quick sniff…” — the simple fact is that you won’t find one.

Should you reject all of her temptations (why wouldn’t you want to take a whiff of the rich, yet delicate scent of her world-renowned feet?) she’ll take her leave, refocussing her fury on the hapless crowd members in the audience.

Everything about this fight is unexpected and uproarious, and indeed, it’s exactly the kind of quirky, offbeat humor that has made the Paper Mario franchise so emblematic.

We can only hope that the next batch of bosses available in the Origami King will be nearly as memorable… and that we may get a chance to sniff their feet, god willing?

If you can’t get enough Paper Mario madness, don’t forget to check out these screenshots direct from the Origami King, as well as a few important observations we noticed in the reveal trailer!