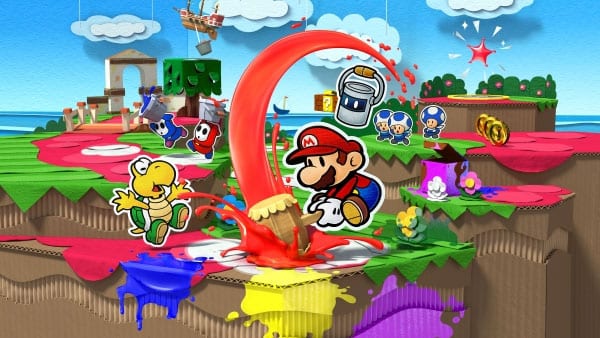 Mario has come in a lot of different styles and shapes over the years, but few have been as memorable as the Paper Mario series. Just like it sounds, the series gives us a 2D cutout version of Mario and his world. Paper Mario: Color Splash is the newest game in the sub-series, and it decides to change things up a little bit from past games by toning back a bit on its RPG elements and emphasizing exploration.

Color Splash starts very much like other games in the series. Princess Peach, Mario, and Toad receive a strange letter from Prism Island, a letter that’s actually a colorless folded up Toad. It urges them to come to the island, and the group quickly sails there by boat. Upon arrival Mario finds a desperate situation, as Port Prisma has been completely drained of color.

As Peach and Mario make their way into the city they stumble upon a strange talking paint bucket named Huey, who gives Mario the ability to use a paint hammer to restore color. Together they restore the color to Port Primsa, and find out that Bowser is really behind the disappearing color all over the island. 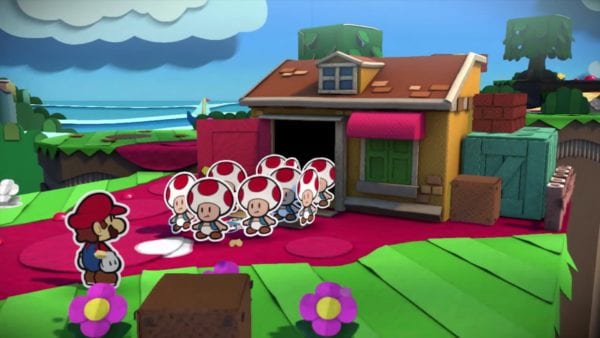 The story is absolutely one of the highlights of Color Splash, and the writing goes along with it. It’s a fun, albeit simple story, that introduces a fun relationship between Mario and Huey. Across the board the writing in Color Splash is phenomenal, and consistently keeps things funny even with minor characters across the world. It’s a very tongue-in-cheek game, often making fun of how ridiculous it is and breaking the fourth wall.

You’ll want to talk to every character you run into just to see what they have to say, from a self deprevating Toad that bemoans his place in life to a Shy Guy that tells Mario how terrible of a Shy Guy he’d be, because he has too much self-confidence and a face. It’s a wacky, colorful game with equally wacky characters.

The game is structured in a traditional Mario fashion, with a world map that features different levels scattered across it. Mario and Huey have to travel across Prism Island and collect six Big Paint Stars to restore color. Each level has a number of Small Paint Stars, that when collected, will unlock another level. Mario can travel freely between each area in the game, returning to previous ones whenever you choose to do so. Levels are 3D areas that Mario explores, and encountering enemies takes you into a battle. 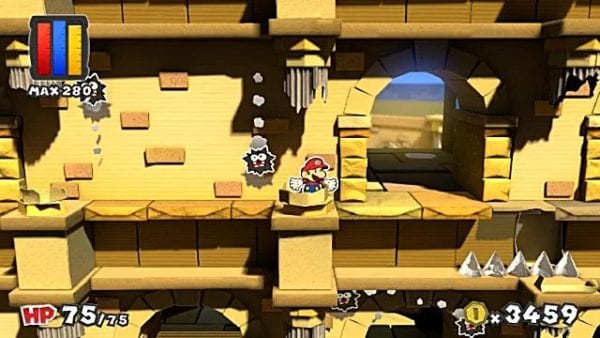 Color Splash has a kind of construction paper design to its aesthetic, that really works for it. The game pops right off of the screen, with vibrant colors and locations. Each area has its own unique design, and oftentimes unique gimmick. This could be a volcano with rising lava, or a forest where everything in it is huge.

Exploration and puzzle solving is fun and engaging, while not being overly difficult most of the time. Areas are dotted with places to hit with your hammer and restore color to, rewarding Mario with coins or battle cards. As you whack things with your paint hammer, your paint levels go down, and you can restore them by finding paint in the world, using items in battle, or having enemies drop paint when defeated.

Color Splash also plays with the idea of paper, oftentimes requiring Mario to unfurl areas of the world to keep progressing. Certain areas in levels allow you to hit the Y button, to perform a cutout. This takes you to the Wii U Gamepad, where you cut along a line to help Mario reach an inaccessible area or solve a puzzle. Sometimes you’ll also encounter giant realistic looking items in the world. Mario and Huey can squeeze these items of their paint, to obtain a card of that item. That card can be used in battle with deadly effects, or is required to solve different puzzles in the world.

There are a few sequences in the game however, that require a little bit of trial and error and can be frustrating. One such example sees Mario being chased by a giant chain chomp, and having to escape in a short sequence. Although it was short, I had to replay the sequence eight times, all because I couldn’t figure out where to go. Because of the design of the game, you’ll also be backtracking to areas a lot.

Some levels have multiple paint stars, and if you collect one, you’ll have to restart all the way from the beginning of the level to go collect the other one. While exploring new areas and unlocking more of the world is incredibly fun, the repetition can drag the experience down at some moments. 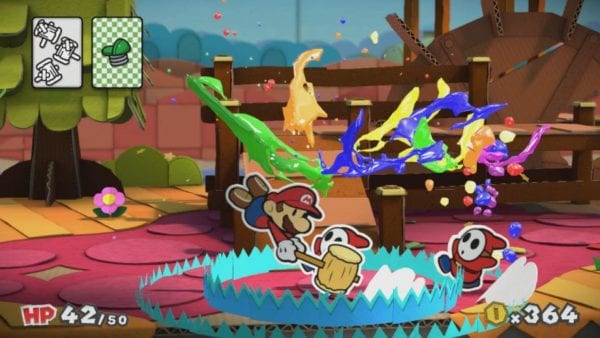 Unfortunately, there’s another aspect of the game that can slow down the experience, the battle system. Color Splash’s battles aren’t necessarily bad, just very slow. You have a deck of cards to choose from in battle, with Mario taking a turn to attack before the enemies turn. You select from your cards on the Gamepad, dragging them into a slot at the top. You then have an option to paint unpainted cards and increase their power, before hitting a ready button and then having to swipe up on the Gamepad to initiate battle. Keep in mind this is what you have to do every single time you battle.

Having to time the attacks you use does keep things more engaging, but battling really slows down the experience of world exploration. It got to the point at times where I just wanted to keep moving through levels, so I avoided every battle I could. Color Splash’s battle system just feels very mediocre, it’s fun to a point, but it can really slow things down and distracts from the better parts of the game.

The powerful item cards that you collect from the world however, can be great fun to use. These allow you to use the giant items you encounter to hilarious effect. A break dancing piggy bank, giant sentient cat statue, and humongous fire extinguisher are just a few. Each scene that plays out in battle is lavishly animated and causes huge damage to the enemy. It’s always exciting to find a new item, and see what kind of ridiculous effect it has in battle. 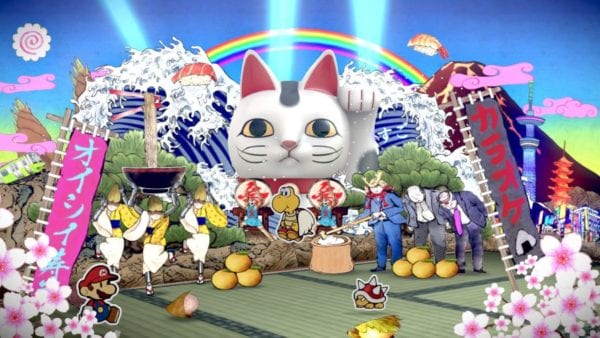 The soundtrack  also keeps things light and fun, with a mix of orchestral, pop, and even rock music. There’s plenty of traditional Mario tunes you hear, and the music of each level seems to fit it well.

When Color Splash works, it really works. Exploring the world is exciting, with the promise of some wacky new thing always around the corner. The hilarious writing only helps to strengthen that fact, as you can’t wait to see what character or event happens next.

Small touches like all the Toads of Port Prisma having a dance party when Mario collects a Big Paint Star, help the game have a unique personality. However, some of the repetition in structure and the battle system, can really slow your experience down, and just don’t measure up to the rest of the game. Nevertheless, it’s a game that any fan of Mario should play. It’s an incredibly fun experience, where the strong points of the game more than make up for its shortcoming.