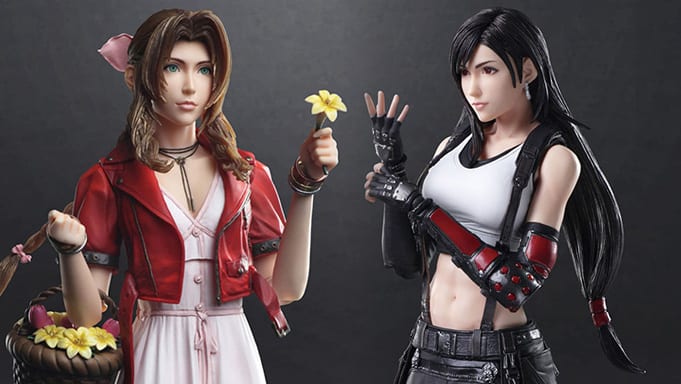 The Final Fantasy VII Remake releases today (or tomorrow depending on where you live), and Square Enix is pulling out the big guns of additional products.

First of all, we get the pre-orders for a brand new series of Play Arts Kay action figures portraying Tifa, Cloud, Aerith, and Barret.

Cloud will be the first to be released on July 18, 2020. Barret will follow on September 30. Tifa will come out on October 17, and Aerith will be the last, on November 14.

Predictably, Barret is the tallest, measuring 281 mm, while Aerith is the shortest, at 247 mm.

Each figure is fully poseable and comes with a Play Arts Kai base with support (since this kind of action figure doesn’t really stand on its own too well).

All come with different accessories including optional hands, weapons, expressions, or hairstyles. You can see them all in the gallery below.

If you’re more into music, we also get a trailer for the Final Fantasy VII Remake Original Soundtrack. It launches in Japan on May 26 in a standard version for 6,500 yen plus tax (approximately $60) including 7 CD.

The Special Edit Version costs 7,777 yen plus tax (roughly $72) and it comes with an additional Bonus Track Disk.

You can enjoy the trailer below the gallery.