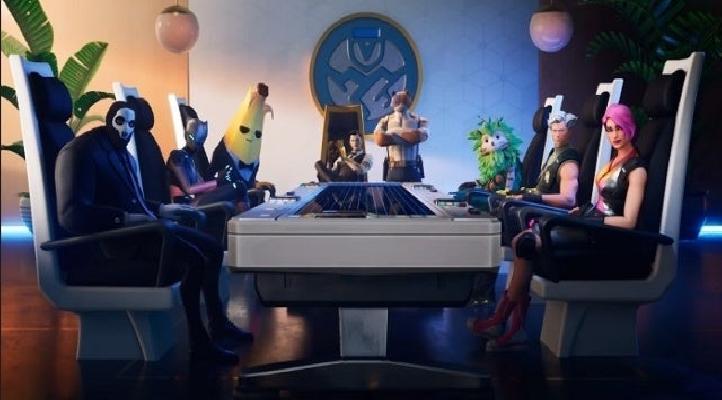 I won’t lie, after the first few games I played of Fortnite’s new season, I wasn’t sure how I felt. The new inhabitants of the island — The Henchmen — pushed the game back into a PvPvE format, but on a scale far larger than the rather basic (and boring) Fortnitemares concept we’d seen before it.

In Fortnite Chapter 2 Season 2 — as an aside, I’ll never forgive Epic for making their new naming format for seasons such a mouthful — five new locations were introduced to the map; The Shark, The Grotto, The Agency, The Oil Rig, and The Yacht all fit the same theme.

It’s basically spies and super villains, like if James Bond’s world was mashed into the vibrant palette of Fortnite to make a kind of Battle-Royale-spy-shooter-after-it’s-shotgunned-six-cans-of-Red-Bull-affair.

These aren’t just normal new locations on Fortnite Chapter 2’s relatively new island. Each one plays further into the ‘Agency’ theme of the season. Landing here will present you with a bunch of AI-controlled Henchmen. They’ll shoot you on sight and chase you down.

Shooting them nets you rewards, and with the new Shakedown feature you’re now able to down them and reveal other Henchmen and chest locations.

You can also drag them over to a new type of locked chest or locked doors and scan them to gain access. Or you can hop into a phone box and assume a disguise. It’s all subtle, but offers clever ways to net yourself more loot if you’re willing to brave the AI masses.

The big prize is the ‘boss’ of each named location. Land at The Shark and you’ll face off against Skye. She’s packing the Mythic Skye’s Scar weapon that’s even more powerful than a Legendary Scar and has a faster rate of fire. It’s brutal.

Defeat her though, and it, along with a Vault keycard, is yours… or whoever gets there first. Follow the on-screen prompt to the Vault within the named location and you’ll find a ton of rare loot inside.

In past instances of PvPvE gameplay in Fortnite, it’s got tiresome pretty quickly. The Ghoulish creatures of Fortnitemares rarely dropped anything worthwhile and their frequent spawn points made them a constant nuisance. It’s not the case this time though. At least, for now.

The Henchmen are, for the most part, found at the new named locations. You’ll also spot them at landmarks, hinting at an underground base that’ll have a good chance of containing rare loot, alongside some more enemies. They’re also at Pleasant Park for some reason, suggesting this long-standing location could finally be on the way out later in the season.

Thanks to how spaced out these new named locations are — dotted largely around the outskirts of the map, save for The Agency in the large center island — it’s easy enough to completely avoid these PvPvE-focused zones and play the game as you always have. You’d be kind of silly to do that though.

The rewards on offer for anyone that can drop the Agency boss at each of the named locations grant a huge boost to your chances of getting the W. All the mythic weapons are powerful, but the likes of the Minigun and Drum Gun are basically overpowered now. If they’re not in your hands, they’ll be with your enemies, so you might as well give it a try.

Even if you don’t net the mythic weapon you were hoping to, the PvPvE element feels so much more fast-paced and intense than it ever did in Fortnitemares. Henchmen deal out significant damage due to their firearms and have a good amount of health and shield to put up a tough fight, especially if you’re dropping there at the beginning of a match.

Plus, those Vaults and mythic weapons are rather enticing, so going to just about any of the new named locations right now offers up a bounty of chaos for Fortnite thrill-seekers.

The more time I’ve poured into Chapter 2 Season 2, the more it’s grown on me. I feared we were in for a season-long Fortnitemares reskin, but those concerns are fading away and I’m more excited about the upcoming limited-time challenges, new content, and inevitable event later in the season. Now, time to get TNTina’s damn Boom Bow.