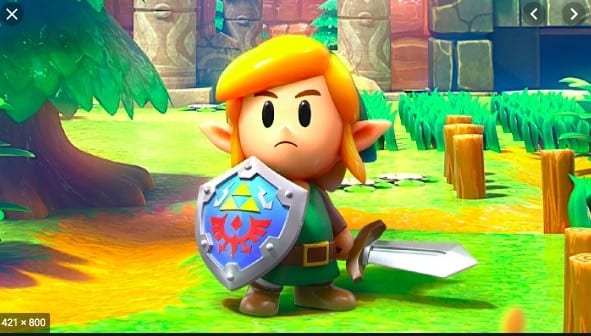 How to Get Golden Leaves in Link’s Awakening

How to Get Inside Kanalet Castle

When you first go to the front of the castle, it will be locked upon arrival. All you need to do is go around to the right back side of the castle and hit one of the pieces of grass with your sword to reveal a hidden staircase. To get to this side, you’ll need to give Kiki the monkey the bananas that you received from Sale, the crocodile from Toronbo Shores, in order for the monkey to create a bridge for you.

Go through the little dungeon after going into the staircase and then head to the right, where you will see a star-shaped pattern of holes. Defeat the enemy that’s popping out of the holes to get the first golden leaf.

Run around to the left side of the castle (you should still be on the outside section), and kill the single black crow that’s perched on a tree to get the second leaf.

Now, finally, head inside the castle and defeat the guards and first slimes that you run into. You’ll get another leaf once they’re all defeated.

Once you go upstairs, you will immediately see two cracked spots in the wall that are surrounded by one of those electric balls. You have to use two bombs to blow up the walls and then defeat the two guards to get another leaf.

You’ll walk past a knight throwing around a ball and chain, but just keep walking until you’re outside on the roof of the castle, then go into the other door.

Now, you simply need to throw one of the pots at the door to unlock it and then defeat the knight to get the fifth and final golden leaf. If you have the bow and arrow, then this fight is a walk in the park.

Once you have the leaves in your possession, just head back to Richard’s Villa in Pothole Field and you will be rewarded with a secret passageway that has a secret seashell.

Going through the path will then lead you into the backyard of his villa where you will find the Slime Key to give you access to the dungeon in Ukuku Prairie, Key Cavern.

And that is everything you need to know about how to get golden leaves in Link’s Awakening. For more on the Switch title, make sure to check out our wiki guide on the game as well as our scored review. We’ve also listed some other helpful guides on the game down below.