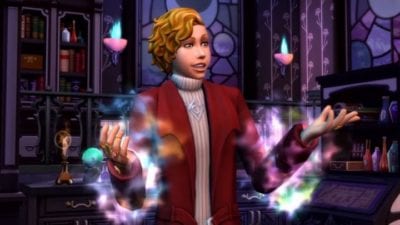 Sims 4’s new themed pack is out and it follows the world of magic. So that you can have everything that a witch or wizard should have, here’s everything you need to know about how to get a magic broom and wand in Sims 4 Realm of Magic.

Getting a Magic Broom & Wand in Sims 4 Realm of Magic

Thankfully, they’re pretty easy to get your hands on in the game. The first thing you need to do is head to the Magic Realm.

If you’ve not been before, you’ll need to jump through the portal that’s behind the Watch lot in Glimmerbrook and follows the steps to becoming a spellcaster.

Once you’re there, you’ll need to head to Caster’s Alley, which is where all the shops are in Realm of Magic.

You’ll have to just head into some of them and try to find one that sells brooms and wands. All the stores change what they’re selling each day, so it’s impossible to say which one to go to specifically.

Once you’ve found them and bought whatever you want, you’ll be able to find them in your sim’s inventory. You’ll then be able to set your favorite wand and broom so that they’re the ones that your sims use when casting spells.

You can also choose whether you want them to use the wand and broom when casting spells and travelling around, or conceal them most of the time.

However, who wouldn’t want to show off their wand and broom in the Sims if they have them.

That’s everything you need to know about how to get a magic broom and wand in Sims 4 Realm of Magic. For more tips and tricks on the game, be sure to search for Twinfinite. We’ve also listed some other helpful Realm of Magic guides down below.

Ni No Kuni 2: How to Use Your Ranged Weapon (Wand, Gun, Bow)