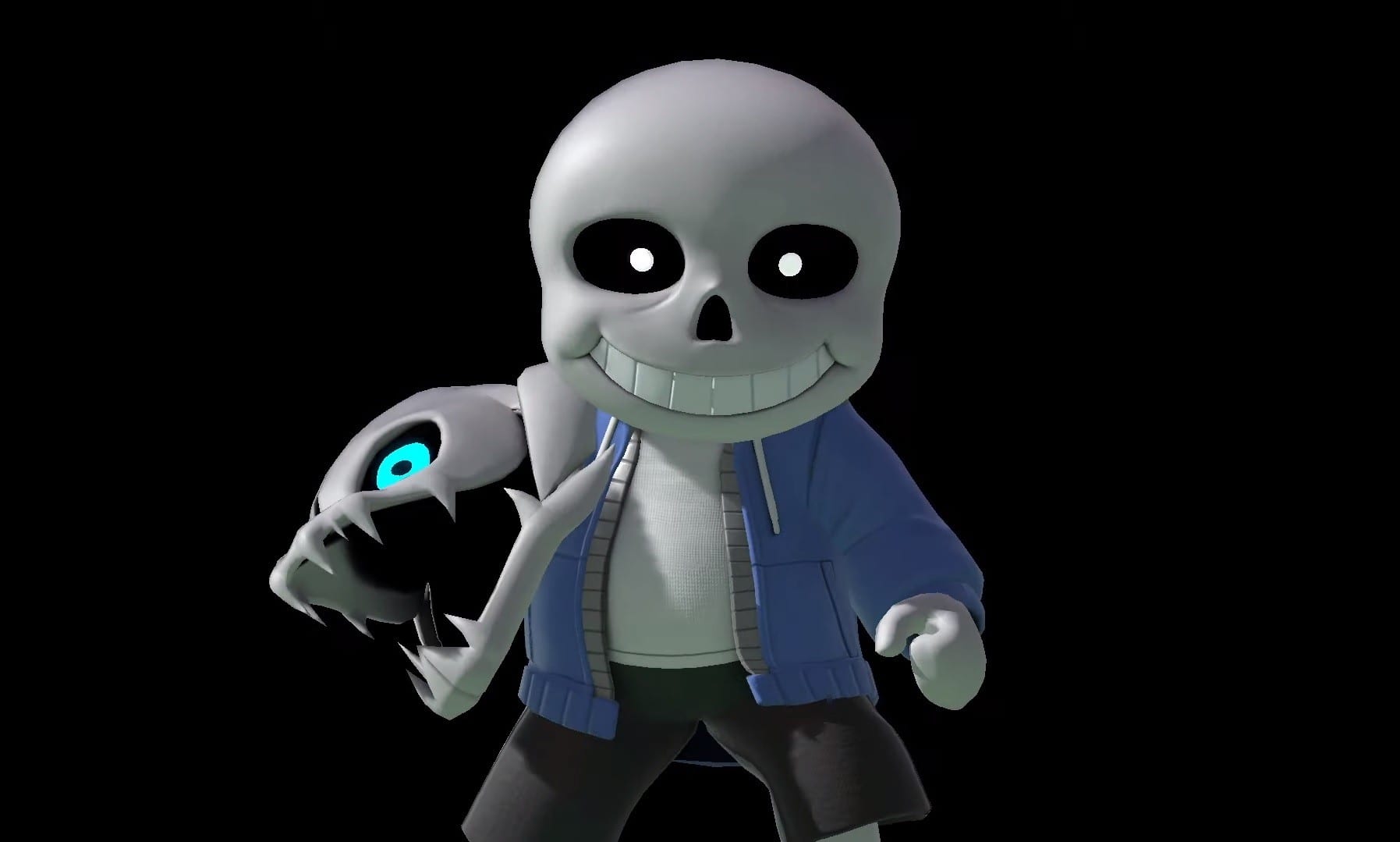 For those of you who missed the Smash Bros. portion, Masahiro Sakurai revealed Banjo-Kazooie‘s moveset and release date (which was September 4th).

He also divulged a few new Mii Fighter costumes, announced that Fatal Fury’s Terry Bogard will be DLC character number four, and unveiled the that more DLC fighters will be released after the Fighter Pack. Truly, dreams do come true.

However, out of all the announcements, reveals, and surprises, none was as big a whammy as the Sans Mii Gunner costume.

A crash course for the uninitiated, Sans hails from Undertale, one of, if not the most famous and influential indie games on the market.

While Super Smash Bros. is no stranger to referencing obscure characters from equally obscure games with Mii Fighter costumes, here’s something you need to remember: these characters have always been from first and third-party games.

Undertale is neither. The Sans costume marks the first time a character from an indie game is playable in Smash Bros.

Sans’ inclusion is even more noteworthy because everyone who purchases the costume also receives a free remix of his boss theme Megalovania.

Who was brought in to produce the iconic song, you may ask. None other than the game’s creator and music director, Toby Fox.

This type of involvement is on the same level of Grant Kirkhope producing Banjo-Kazooie music for Smash Bros. —which happened, FYI.

No other Mii Fighter costume in the history of Smash comes with a free music track, which demonstrates the sheer spectacle that is Sans’ induction to the hall of Smash. Moreover, the Sans costume and Megalovania remix set a new precedent for potential Smash Bros. DLC.

It’s no secret that many gamers want more indie representation in Super Smash Bros. Ultimate. Indie characters never appeared in Smash Bros. prior to Ultimate, but before Sans, these inclusions were little more than window dressing.

Shovel Knight, Shield Knight, the playable members of the Order of No Quarter, and Shantae are in Super Smash Bros. Ultimate, but only as an Assist Trophy and as spirits, respectively.

Even though the Sans costume doesn’t feature its own moveset and is just a cosmetic costume for the Mii Gunner, it’s still a playable representation of a popular character from a popular indie game.

Given the effort that went into the Sans costume —and the extra but totally awesome Megalovania remix— Nintendo and Sakurai might be signaling they’re ready to include more indie characters, and Nintendo has quite a range of indie titles to draw from.

As of late, Nintendo has doubled down on the indie scene, and for good reason. The Nintendo Switch is extremely popular.

If the influx of game ports for the Switch is any indication, virtually every developer, from AAA companies to smaller indie studios, wants their products on the little home/handheld console hybrid.

Nintendo is more than happy to oblige and takes pride in its library of indie games for the Switch, dubbed Nindies.

Just visit the Nintendo eShop and you will find plenty of popular indie titles for sale, including Axiom Verge, SteamWorld Heist, Divinity: Original Sin 2, and the represented-in-Smash titles that are Shovel Knight, Undertale, and the Shantae franchise.

Heck, the latest SteamWorld game, SteamWorld Quest: Hand of Gilgamech, originally launched on the Nintendo Switch, and Nintendo even gave Brace Yourself Games, the indie studio behind Crypt of the NecroDancer, permission to develop the Zelda-themed spinoff Cadence of Hyrule.

Nintendo is clearly enamored with indie games, and who can blame them? Indie games tend to do well on the Switch, some far better than more popular platforms such as Steam.

However, despite Nintendo’s love of indie games, the company gave them little representation in Super Smash Bros. Ultimate when the game launched.

However, Nintendo’s growing Nindie library —especially the Nindies that are/were exclusive to the Switch— coupled with Sans could indicate that they’re warming up to the idea of including more indie characters in Smash.

It’s impossible to say, should Nintendo go down the playable-indie-characters route, whether the characters would be actual additions to the roster —complete with their own stages and music.

These inclusions could just as easily consist of more Mii Fighter costumes. Regardless of the direction, more indie fighters will please plenty of gamers since, let’s face facts, indie games are just so popular.

Even if Nintendo wanted to include more indie characters, though, only one more slot remains in the Fighter Pass, which limits the amount of potential indie representation.

But let us not forget that Sakurai will produce more Super Smash Bros. Ultimate characters after the Fighter Pass, even though that raises the question of why he would bother.

Isn’t five (six if you count Piranha Plant) enough in a game already bursting with well over seventy playable characters?.

One possible answer is some characters are so popular Sakurai wants to include as many as possible. After all, fan-demanded characters such as King K. Rool, Ridley, and Banjo-Kazooie made it into Smash, so why not other popular characters like Crash Bandicoot, Geno, and the Doom Slayer?

A second pass gives even more characters a shot at smashdom, and that’s just assuming Sakurai will stop at two passes. While I would love to see the Doom Slayer rip and tear through the competition, maybe, just maybe, the second Fighter Pass is designed to focus on indie characters.

I don’t think many gamers will complain if Terry Bogard is accompanied by a Shovel Knight Mii Swordfighter costume and an epic remix of Strike the Earth.

Given Nintendo’s focus on porting as many indie games as possible (and allowing indie developers to create games based on their properties), coupled with the surprise extra DLC characters slots and even more surprising Sans costume and music, one would be hard pressed to believe Nintendo doesn’t plan on adding more playable indie characters to Super Smash Bros. Ultimate.

With any luck, Sans is just Nintendo’s way of dipping their toes in the water before they fully submerge themselves in the indie Smash ocean.