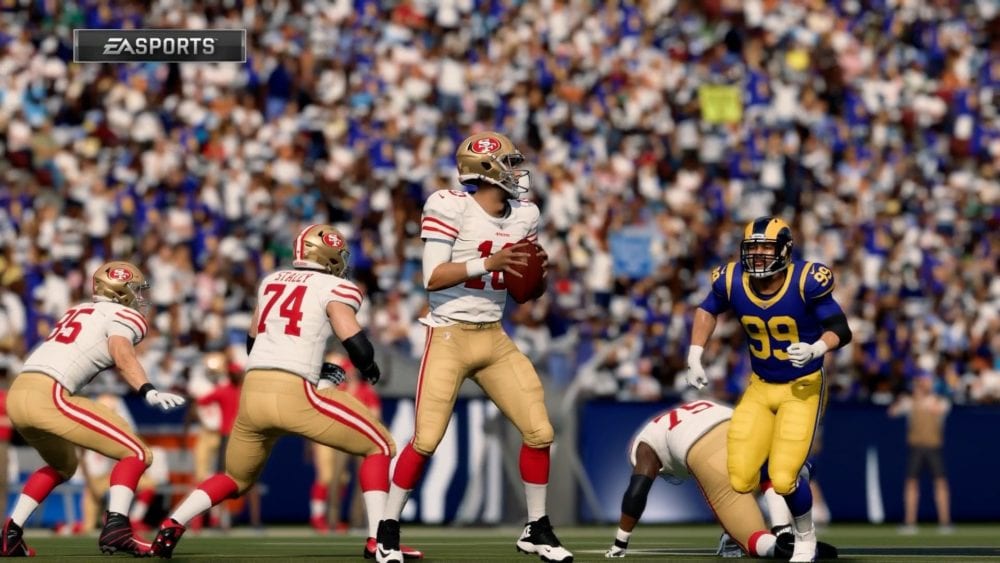 This year’s version of Madden doesn’t introduce any massive changes to gameplay, but there are one or two interesting mechanics worth schooling up on. Scrambling wasn’t something that EA made a huge deal out of in the build up to Madden 20’s launch, but it does make your QB much more dynamic. Learning how to scramble will give you a big advantage over rival players. Here’s how it works.

How to Scramble in Madden 20

Essentially, the scramble mechanic allows you to turn your QB into a proper ball carrier at the press of a button.

By using the scramble or ‘pull-down’ mechanic during a passing play, you bring up the passing icons that give you the option to perform spin moves, juke moves, and various ball carrier moves while on the run.

If there’s on then you can press the button again and opt to throw instead.

How to Do it

To scramble as a quarterback, you’ll need to hold R2 (PS4), RT (Xbox One) or Shift/Right Mouse Button (PC) as soon as your QB gets the ball. This will immidiately allow him to start running and performing ball carrying moves as he does so.

Something to keep in mind is that your QB is much more likely to fumble the ball than other positions on the team. Even if he has a high carrying skill, EA has designed Madden in such a way that every QB is a hopeless butterfingers.

That means you definitely want to hone your ball carrying moves or off-load a pass ASAP.

One move we recommend learning is the slide, which ensures you secure whatever distance you’ve gained during the ball carry.

This is performed by letting go of the trigger button and then hitting Square/X (PS4/Xbox One) once you’re beyond the line of scrimmage.

We have a more detailed guide here.

That does it for how to scramble in Madden 20. For more useful guides, search Twinfinite. Otherwise, we’ve listed some content below you might find useful.