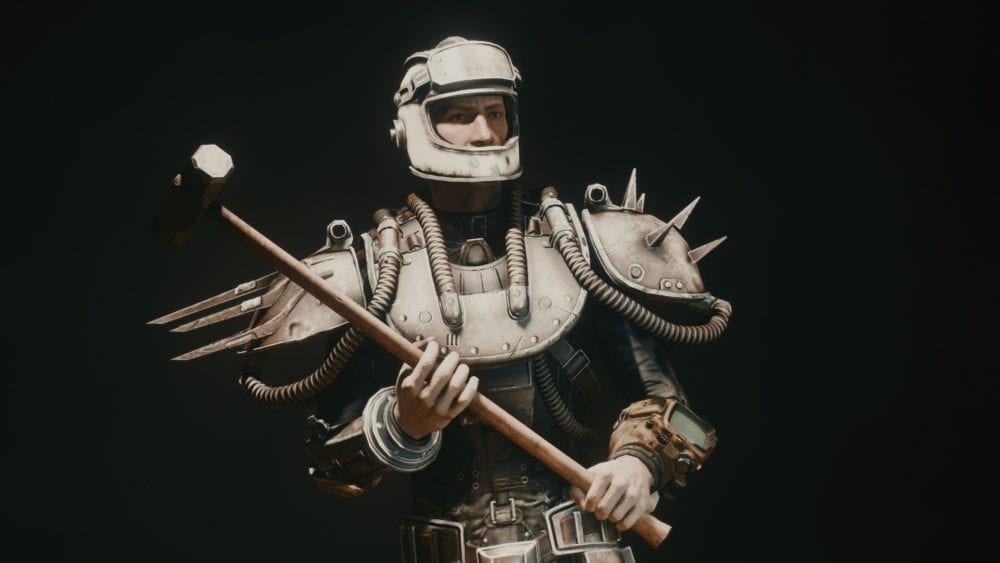 Another addition to the ever-ambitious Capital Wasteland Project, this mod adds the classic metal armor from Fallout 3 and New Vegas to the game. If you find yourself missing Fallout 3, or just want your attire to have more of that spiky, old-Fallout feel, then this is the mod for you.

The metal armor comes with four different under-armor options, including the Vault Suit as well as leather and metal attire. You also have the choice of two different helmet options.

This armor can be obtained once you reach level 15, after which you’ll find it commonly on raiders all over the Commonwealth, as well as popping up on vendors randomly. The armors come in differing strength levels, with you being able to craft the most basic version in the utility section of Chem stations.

For some of us, its important to feel like our efforts to help the Commonwealth are making a tangible difference to the landscape, whether it’s by actually being able to pick up rubble off the ground, or by being able to clean the flotsam out of bodies of water.

A sizable portion of Fallout 4 modders are dedicated to nice-ifying the Wasteland in what could be considered a virtual conservation effort, and this mod is no different. It skims out unsightly trash textures from ponds and streams, replacing it with high quality lily pads.

This is particularly useful if you like your settlements near watery areas, like Spectacle Island or Dalton Farm. It also has an optional pond scum remover, just in case you want your streams to look crystal clear.

Stealthy Takedowns lets you get the sneak on non-essential NPCs, be they human, synth, or ghoul, and execute a swift and silent stealth kill. To be able to use this move you’ll need Sneak level 1, as well as the first level of the Mister Sandman perk.

Once you unlock the ability you can stealth kill any NPC (provided they aren’t wearing power armor) with a variety of different kill animations, depending on which weapon you use.

When you get to Sneak level 4 you’ll enter a state of enhanced stealth when you sneak, turning your “sneaky takedown” into a “silent takedown”. This means that you’ll no longer make any noise while crouching or killing, and the death won’t be attributed to you.

If you find yourself craving a fresh experience in the game you should visit the enchanting Elisium Island – the perfect retreat for any fatigued Fallout player who feels like they’ve seen it all.

The mod brings a breathtaking new map to the world, filled with lush greenery and a menagerie of exotic (by which we mean non-mutated) wildlife. You can get there from Spectacle Island, where you’ll find a small boat at the destroyed port that will take you to the location.

Elisium Island also boasts an array of new structures and plush-looking furniture to craft, as well as recipes that use the island’s foragable fresh food items. As well as looking absolutely gorgeous, there’s also plenty of exploring to be had, with several caves to investigate and four stories to uncover.

Do you ever get tired of how long it takes to scrap everything in your settlements just so you can build on them? Then look no further than Raze My Settlement, a mod that bypasses all of that running around and lets you get rid of all the junk in one fell swoop.

The mod comes in the form of a holotape named “Raze My Settlement”, which allows you to address the objects and junk in your settlement en masse.

As well as the option to gather all junk to the vicinity of the settlement’s workshop, you can also scrap everything at once. Depending on your setup’s processing power, this should only take around 60 seconds, leaving you with a stripped blank canvas ready for all your building ambitions.