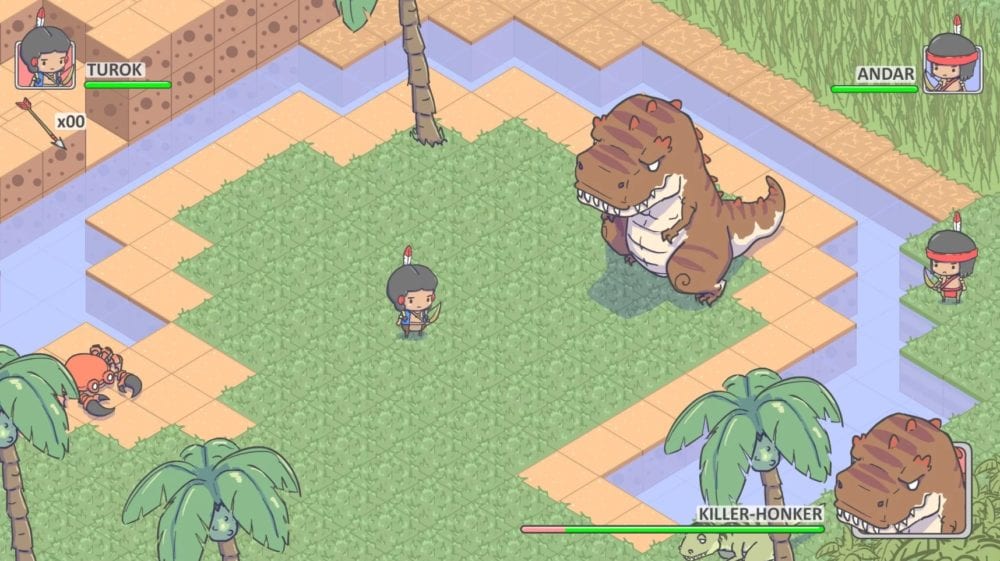 Almost out of nowhere, a brand new Turok game has emerged on the storefront of Steam with a release date of July 25.

First reported by Eurogamer, Turok: Escape From Lost Valley is headed to Steam this month and is bringing a cute new look along with it.

Sporting chibi-style characters and hand-drawn art, this take on Turok is vastly different from the original that launched on Nintendo 64 back in 1997.

Published by Universal Studios Interactive and developed by Pillow Pig Games, Turok: Escape From Lost Valley is a unique conceptualization of what Turok can be on a smaller scale.

Rather than replicating the 3D dinosaur hunting first-person shooter that we know Turok to be, Escape From Lost Valley is an isometric 2D top-down action-adventure game that pits Turok against animals, primordial tribes, and most importantly, dinosaurs.

Spawned out of a game development challenge that Universal Studios Interactive put on in 2018, Pillow Pig Games challenged themselves with the formidable task of dusting off the Turok franchise and attempting to return it to its former glory.

Although Pillow Pig Games did not win the developer challenge (that honor went to Voltron: Cubes of Olkarion), Universal Studios Interactive gave the developers the green light to release a full version of their contest entry.

Pillow Pig Games have taken a unique approach to the series by bringing down the grit and gore and cranking up the cute meter to eleven.

Inspired heavily by the art direction of Pillow Pig Games’ previous title, Fighties, Turok: Escape From Lost Valley looks to be a true re-imagining of the series.

Shown in the trailer below, Turok sports his iconic bow from the past and has also added more mobility and dodging mechanics to his arsenal as well.

Equipped with a Dark Souls style roll, the trailer displays how Turok will evade damage and sneak behind his foes as he attempts to progress through the world.

Check out Turok: Escape From Lost Valley when it roars onto Steam on July 25.