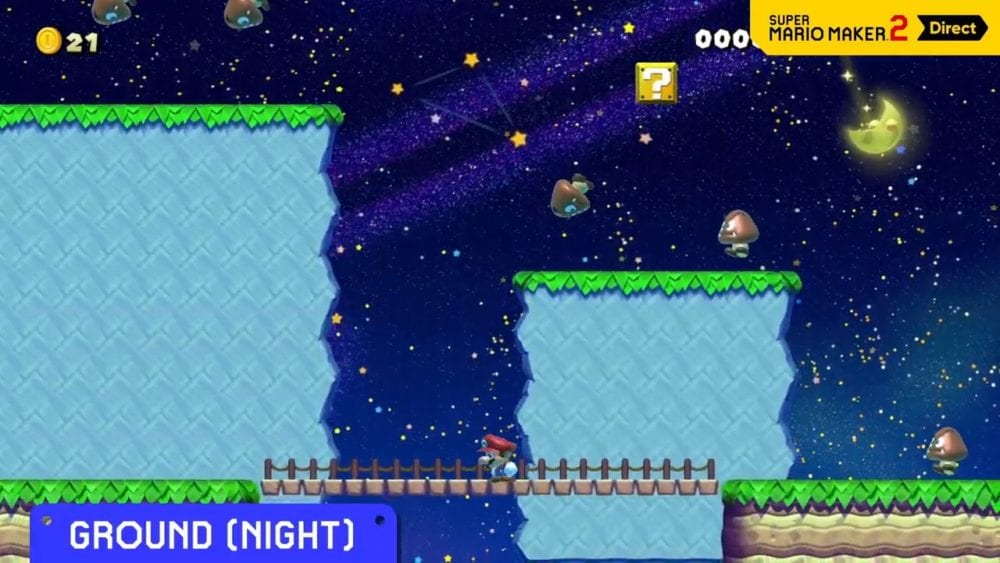 Night Mode is one of the cool things you can play around to really change up how your courses play out in Super Mario Maker 2. This can be used in almost every course theme, or level style within the game, too, so it doesn’t matter what kind of aesthetic you want your level to have. Here’s how to unlock Mario Maker 2’s night mode and what it does.

How to Unlock Night Mode in Mario Maker 2

To unlock Night Mode in Mario Maker 2, you need to select the Angry Sun when you’re in the level creator screen. It can be found at the top of the screen to the right of the Goomba, as shown in our screenshot below. After adding one of these to your level, all you need to do is press and hold on the sun for a moment and you’ll be given the option to change it to a moon.

Doing this enables Night Mode, adding some pretty stars to the background of your level. It also adds an effect to your level depending on the theme you’ve used. We’ve noted all of these down below.

What Mario Maker 2 Night Mode Does

Night Mode not only changes the entire level to nighttime to give it a dark look and alters the music that accompanies your level, but it also makes pretty dramatic gameplay changes depending on the theme of your level. Check them all out below. It’s also worth noting that if you can get the moon when playing through your level, it’ll eliminate any enemies that are on-screen at the time.

On this theme, Night Mode makes Goombas float around, rather than having gravity keep them grounded to surfaces.

There’s less gravity when using Night Mode on this theme, making Mario and all enemies float around the level. That also means you’ll be able to jump considerably further and longer.

The whole level is turned upside down. Moving left and right on your controller still sends you in that direction, but as you might have guessed, Up and Down have been inverted, meaning Up is now ground pound and down is used to open doors.

All water is now poisonous and Mario will instantly die if he touches it in Night Mode on this theme.

The whole screen goes black except for a small circle of light around Mario, giving you limited visibility. If you get a Super Star, though, the whole screen will then return to normal.

Ghost House’s Night Mode in Mario Maker 2 is the same as the Underwater theme. Makes sense with it being ‘spoopy’ and all.

Sandstorms will occasionally blow through the level which can send Mario flying in all kinds of directions. Where they come from appears to be random from our experience, and some will be far more powerful than others.

Just as was the case with the Ground theme, Night Mode on Airship makes enemies move as if they’re underwater.

Mario will move around like he’s swimming, but all of the enemies act as normal.

That’s everything you need to know about how to unlock Night Mode in Mario Maker 2 and what it does on all themes. For more tips, tricks, and guides, be sure to search for Twinfinite or check out more of our guides for the game down below.